WASHINGTON – When it comes to planning a conference, well Trevor Knoblich isn’t an expert but he certainly looks the part. Knoblich is helping plan the Online News Association’s annual conference at the end of September and helped us get a better idea of what to expect in Chicago.

Knoblich, ONA’s digital director, says he has specific sessions he’s looking forward to, including those that delve into the idea of startups both within and outside newsrooms and the technology/human capital that makes them feasible. 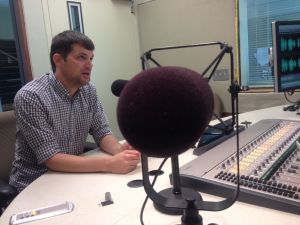 Trevor Knoblich is the digital director of the Online News Association. (Photo by Megan Cloherty)

The keynotes this year are a bit unexpected. (Working backwards) on Saturday, Sept. 27, the keynote features the Sesame Workshop.

“They have done some amazing work in terms of audience engagement; in terms of mobile design; in terms of building apps and they’ll be talking about how to reach an audience, about important issues that we face. Children’s programing tackles these issues just like news outlets do,” Knoblich said.

A goal of his in coming into the role of the digital director at ONA, Knoblich said, was getting fresh voices from other industries involved in the conversation to improve how news outlets interact with their audience.

The other keynotes include a conversation about The New York Times Innovation Report and the editorial lessons to come out of the coverage of the shooting of Michael Brown in Ferguson, Mo.

More than 460 ideas came into ONA’s public call for conference session topics. Knoblich said some very important people helped whittle down that list over two months to suss out the most important topics that formed the conference schedule.

Beyond the schedule, there is plenty of built-in time to network. Food trucks will be on hand to help fuel our inquiring minds. And then there are the extra curricular activities — both sanctioned and unsanctioned — that will take place during the trip.

“The Midway is an area of the conference that is sort of the innovation playground,” said Knoblich.

While there sounds like there will be plenty of cool startups to check out at the midway, located in the heart of the conference, It’s All Journalism will also be there!

We plan to broadcast live from the Midway during the conference on Thursday, at 3 p.m. We are also heading a session on podcasting on Saturday, at 10 a.m.

ONA is planning to live stream some sessions from Chicago’s Sheraton Hotel, including our session. See the full conference schedule of events at www.ONA14journalists.org.