Seamus Tuohy likes to use the term “digital hygiene” to describe a set of best practices for how people incorporate digital security in their daily lives. 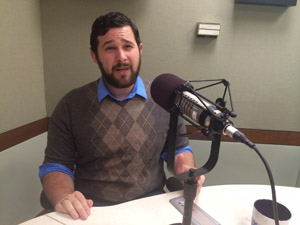 Seamus Tuohy was in studio talking about Internet security. (Photo by Michael O’Connell)

“I have to enter between five and six passwords to check my email in the morning, because I have a USB stick that’s encrypted that holds my password,” he said. “It actually holds a few different encrypted mini-volumes that each have passwords different computers or different uses.”

Tuohy is a technical adviser at Internews, an international non-profit whose aim is to empower journalists across the globe.

“We provide services to independent media organizations and civil society groups, both helping them develop the capacity to build radio stations or other media development work, as well as helping digital security services, services around developing better content, as well as services around teaching people basic journalism skills in areas where there’s news to be had, but are having a hard time getting it out,” Touhy said.

He builds tools to help communities involved in conflicts to secure their communications.

“My work mainly involves finding the right circumvention or anti-censorship tools that work for a certain population, both the utility of those tools and actually if they can be used in the field,” he said.

On this week’s podcast, Tuohy discusses the importance of Internet security in protecting a journalist’s work and communications with sources.

“The things that journalists overseas need are actually the same things that we need here in the U.S.,” Tuohy said. “Often times, journalists need to secure their communications so their sources don’t get out, so their story doesn’t get snatched or taken from them by another news organization. Also, just to be able to do the research. In a lot of societies, huge parts of the Internet are being cut off, and so, being able to evade censorship to find the news, find external sources, find corroboration of the stories you’re trying to tell is incredibly important.”

He points out some of the common vulnerabilities around laptops and cellphones, and offers some suggestions on how journalists can improve their digital hygiene.