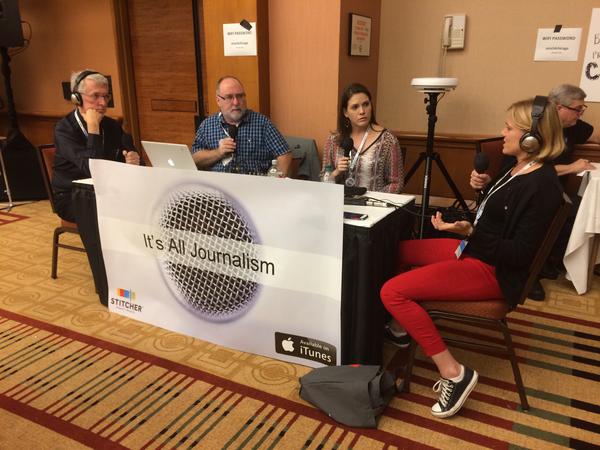 It’s All Journalism podcasts live on the Midway floor at the 2014 Online News Association annual conference in Chicago on Thursday, Sept. 24. Producers Michael O’Connell and Megan Cloherty are joined by Jeff Jarvis, media pundit and professor at the City University of New York’s Journalism School, and Mandy Jenkins, the open news editor at Storyful. (Photo courtesy of Josh Hatch)

“It’s about turning journalism on its head and listening to the communities that we serve and first find out what their needs are,” Jeff Jarvis, media pundit, author, and BuzzMachine blogger, said Thursday, Sept. 25, at the 2014 Online News Association Conference in Chicago.

As a professor at the City University of New York’s Graduate School of Journalism, Jarvis is spearheading a new social journalism program that goes beyond just training students how to use Twitter and Facebook well.

“Those are certainly tools people have, but this is really about realizing that journalism properly constructed is not in the content business,” he said. “Journalism is a service and a service accomplishes things for people. So, you’ve got to know what people’s goals and needs are before you can actively help them meet those needs.”

It’s All Journalism producers Megan Cloherty and Michael O’Connell interviewed Jarvis and Mandy Jenkins, the open news editor at Storyful, as part of a live podcast at the ONA Conference.

Jenkins blazed trails at TBD.com, the Huffington Post and Digital First Media’s Thunderdome in the way journalists can use social media to help them tell stories. She sees this new CUNY program as a reflection of what’s happening in newsrooms today.

“Every bit that we’re trying to do from identifying eyewitnesses, to getting their voices heard, to putting them in touch with the audience and bringing the audience in as the storyteller,” she said. “It’s a circular process. Getting more people to come into the industry who already understand that is going to be killer.”

Jarvis pointed to Jenkins as an example of someone was more than just the “social person” in the newsroom.

“She’s a journalist who understands social,” he said. “That’s the key of where we have to shift this. Mandy is really a model for many of our students going forward.”

Jenkins also talked about the ongoing efforts of ONA’s User Generated Content Ethics Group being led by Fergus Bell and Andy Carvin of the Associated Press.

She participated in an informal meeting Thursday of the group, which discussed some of the key ethical issues newsrooms are struggling with when in comes to using “eyewitness media.”

“There’s been a group of journalists who have working on that over the last year, really identifying some key points on that, ranging from crediting eyewitnesses, to keeping them safe,” she said.

Other topics of the group discussion concerned verification and even the trauma social journalists may experience as they wade through eyewitness media.