Journalists, particularly journalists of color, are in need of financial backing for their projects as well as training on how to pitch their ideas to the business community.

The New U program seeks to address those shortfalls through a crash course for minority journalists who are entrepreneurs. Those who go through New U training have the opportunity to win several thousand dollars to fund their new journalism venture. 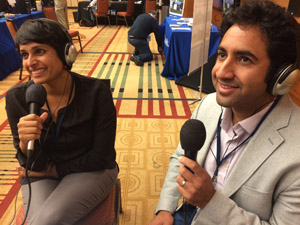 Umbreen Bhatti, left, a lawyer and a 2014 John S. Knight fellow at Stanford University, and Kaizar Campwala, who works in partnerships and marketing at Stitcher, talk to It’s All Journalism about diversity, entrepreneurship and podcasts at the 2014 Online News Association Conference in Chicago. (Photo by Michael O’Connell)

We talked to Umbreen Bhatti and Kaizar Campwala about the program. Bhatti said keeping an audience in mind is the most important factor in a successful new journalism venture. If a person doesn’t cater to an audience, then she won’t be successful.

“So often journalists are thinking about their audiences in a generalized way. Could it be useful to think of a really specific type of person?” said Bhatti, a lawyer and a 2014 John S. Knight fellow at Stanford University.

Bhatti gives tips for how people can understand their users. For example, journalists need to be able to identify the gap between what people say they like and what they actually do.

Journalists need to ask the consumers of their products for specific examples of how they interact with the journalists’ content. For example, if a person has a podcast, she needs to ask users specifically what they did the last time they listened to an episode. She needs them to speak precisely about their experience, not in general terms, according to Bhatti.

Campwala knows quite a bit about podcasts. In addition to being involved with New U, he heads the business development team at Stitcher radio, a service that allows people to listen to radio shows and podcasts on demand.

He contacts companies like Apple and Samsung to make sure Stitcher is distributed well through their products. He also works to get Stitcher installed into cars.

Campwala said the explosion in audio programming, including podcasts, is the result of widespread mobile device use. Now, a person can take audio stories with them anywhere they go. “As a storytelling medium, there is nothing like audio,” he said.

But audio formats have their challenges too. Audio stories are harder to find on the internet because audio files are not as easily searchable.

“There is no Google for audio,” Campwala said.

So you wanna podcast? Tips on how to be an online audio star

How to market to and break-down content for mobile