Josh Stearns has been interested in promoting press freedom for a long time.

“The reason that I got into press freedom is that I was concerned about the state of local news specifically, and protecting the smallest journalists and the smallest operations,” he said. “I just think that when it comes to the health of local communities, we need those people who are both doing the accountability/watchdog reporting locally but also just the neighborhood news, the things that connect us as people to our communities and to others in our neighborhoods.” 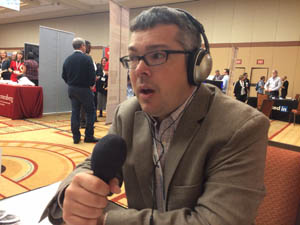 Josh Stearns is the director of journalism and sustainability at the Geraldine R. Dodge Foundation. (Photo by Michael O’Connell)

“I’m working with six local sites around New York and New Jersey basically as a startup mentor and R&D coach, helping them figure out how do they move from just getting off the ground to actually having a diverse revenue stream that’s going to sustain them over the long term.

The sites Stearns is working with range from those founded by former reporters at CNN and The New Jersey Star-Ledger who launched their own hyper-local news sites, to Justin Auciello, an urban planner who founded the Jersey Shore Hurricane News, a Facebook-based news site. The White House honored Auciello for providing Jersey Shore residents with up-to-date news in the aftermath of Superstorm Sandy.

“It’s a really wide-range of groups, but all of them are really focused on supporting their local communities and trying to fill the news gaps that are occurring in New Jersey,” he said.

The work Stearns and his colleagues are doing is being documented at The Local News Lab.

Stearns’ roots began in storytelling for social change, working in press freedom and Internet freedom for about seven years.

“While I was doing that, the key intersection was ‘What is the role of journalism in local communities?’ and ‘Why should local communities care about defending press freedom and supporting local journalists?'” he said. “Through that, I just got really interested in getting away from the advocacy side and actually getting towards building better structures for local news.”

It’s All Journalism talked to Stearns at the 2014 Online News Association Conference in Chicago about how the sites he’s working with are tackling the same problems other local news outlets are dealing with — reporting the news and supporting their communities while exploring new avenues for sustainability.