Amy O’Leary was at a journalism conference in Amsterdam when she first heard the New York Times Innovation report had been leaked and made public.

As the Times‘ deputy editor of digital operations, O’Leary was part of the team that spent six months preparing the document that was only supposed to be glimpsed by the upper echelon of the newspaper’s editorial staff. Now it was out there online for everyone to see, courtesy of BuzzFeed.

“When if first got out, we were all kind of upset,” she said. “We just didn’t know how people were going to take it. We had this very candid document that had a lot of our most naked challenges laid to to bare in this report, and we just didn’t know. Our harshest critics, our stiffest competition could all sort of pick this apart. And that just never feels good.” 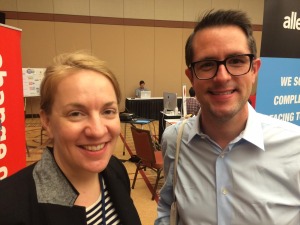 Amy O’Leary, left, is the deputy editor of digital operations at The New York Times. Tyson Evans is the Times’ editor of newsroom strategy. (Photo by Michael O’Connell)

Tyson Evans, editor of newsroom strategy at the Times, was one of those who’d seen the report before it had been leaked.

“There had been a little circulation within the Times of people who were asking for feedback around it,” he said. “We were trying to kind of gauge what were the first steps after the report was maybe seen. And then, all of a sudden, everyone was reading it and it was like the most water cooler conversation you could imagine, right?”

Evans described it as something of a magical moment in the newsroom, when everyone was speaking from the same textbook.

“We had this amazing shared document all of a sudden, where everyone was talking about ‘What did you think about the point they made on page 60?'” he said.

When O’Leary and her team put together the report, it included five recommendations that they hoped the Times‘ editorial leadership would adopt.

“We had no idea if our bosses were going to green light any of them,” she said. “The document was meant to persuade them to do these things, and what we didn’t actually expect was that they approved all of them basically immediately. That surprised us. We thought they were going to turn some of them down and maybe just focus on one.”

This occurred shortly after the report was delivered in March and before it’s public posting in May by BuzzFeed reporter Myles Tanzer.

“If anything, having it public and with the public commitment from our editors that they want to pursue all of these, really does hold us accountable in an open and public way to follow through,” O’Leary said. “And I think that’s good.”

O’Leary and Evans spoke about the report and its sudden appearance in the public eye during a Sept. 26 keynote address at the Online News Association’s annual conference in Chicago. The next afternoon, they sat down with It’s All Journalism producers Megan Cloherty and Michael O’Connell to discuss what having the innovation report publicly available means for the Times and the journalism industry as a whole.