Earlier this year, The New York Times launched T Brand Studio, a unit within its advertising department to create branded content for the newspaper’s digital platform.

“Branded content, when you think about it from what it used to be, that was John Deere printing a catalogue,” said Melanie Deziel, the social media strategist for T Brand Studio. “That was Betty Crocker putting a recipe on the back of a box. They were creating content. Brands have been creating content for a really long time.” 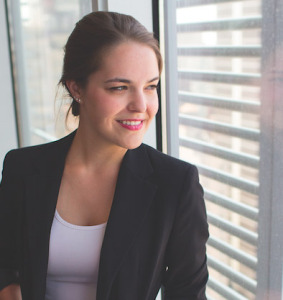 Melanie Deziel is the social media strategist for T Brand Studio at The New York Times.

“Publishers are adjusting to all of these incredible tools we have at our disposal with the rise of digital and smartphones and tablets and all of that,” she said. “Just as publishers are adjusting, brands are too and they’re realizing that for many of them, they don’t have to reinvent the wheel. They can leverage those tools by partnering with a publisher.”

What publishers like The New York Times hope to reap from such an arrangement is using branded content to help finance the quality journalism the editorial side of their business is creating.

“We’re able to form a partnership, wherein they give us an idea of what some of their goals are, what some of the things are that they’re trying to express as a brand, and we’re able to leverage our own skills within T-Brand Studio, almost like our own mini-newsroom, to help tell those stories,” she said.

In June, Deziel worked on a campaign for Netflix around the release of the second season of the series “Orange is the New Black.” The company wanted to raise awareness of what the series was about.

“We came up with a story that sort of took a step back from the brand, from the show itself, and told a higher level story about women in prison and their unique experience of incarceration and what sort of programing was and wasn’t available for women who are in prison,” Deziel said. “So, it wasn’t necessarily about ‘Orange is the New Black,’ but it was about what ‘Orange is the New Black’ is about.”

Although Deziel wrote the main feature for the campaign, her primary job was to make sure the content was seeded on social media so the ideal audience would see it.

“It’s definitely a challenge,” she said. “It’s a unique process for advertiser we work with and each piece of content we make, but it definitely keeps it exciting.”

The final product was posted on the paper’s website and clearly labeled to tell the reader that they were reading paid content.

Deziel stressed that The Times maintains a clear “separation of church and state” between the content produced by T Brand and the paper’s editorial department.

“We don’t want any confusion,” she said. “There’s 163 years of incredible brand equity that we don’t even want to associate ourselves with unfairly. That belongs to them and they’ve earned it and they can leverage that. I think it’s only fair for us to have to establish some of our own clout on the advertising side.”