Mark Glaser, editor of PBS MediaShift, has been covering the shifting media landscape for six years. Part of his mission is to bring new ideas about journalism innovation and startups to the masses.

Glaser and the MediaShift team recently traveled to Washington, D.C., for a Collab/SpaceDC event on open data sponsored by the Reynolds Journalism Institute at the University of Missouri. 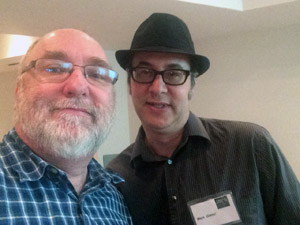 “It’s really a collaborative workshop, an all-day workshop that highlights innovative projects,” he said. “And we use improv comedy techniques to get people to work together better, to say ‘Yes’ to other people’s ideas instead of ‘No, that’s a stupid idea.'”

This was the fifth such event MediaShift has put on around the country.

“We try, not like some of the pitch competitions that happen with innovation projects and startups, we actually, instead of naming a winner, making a competition, we really make it about collaboration and kind of helping these projects overcome some of their challenges,” Glaser said.

Since this Collab/Space was taking place in Washington, D.C., just a few days after the midterm elections, Glaser decided to focus on projects that utilized open data in some fashion.

“So our projects were about different people doing interesting things with data, whether it was media companies like U.S. News & World Report had a project, Washington Post,” he said. “Whether it was a startup like FiscalNote or whether it was nonprofits like Sunlight Foundation or MapStory, it was kind of a mix. We’ve never really mixed it up that much before, but we really just wanted to support open data for public good.”

In this week’s podcast, Glaser talks about the Collab/SpaceDC event, how the media landscape is different but kind of the same after six year’s as MediaShift’s editor and his own weekly podcast on the topic of journalism, Mediatwits.