It takes time to learn how to be an investigative reporter and do it well. NBC Washington’s Tisha Thompson and Rick Yarborough have mastered the art of producing consistently enterprised stories that make a difference.

While they are both humble and say they found the path to investigative reporting in different ways, multiple awards prove their work is some of the best in the country and in joining us on It’s All Journalism, the reporter and producer team shared some tricks they’ve learned over the years.

Full disclosure, Tisha and I are old friends. I met Rick through the Investigative Reporters and Editors professional organization. 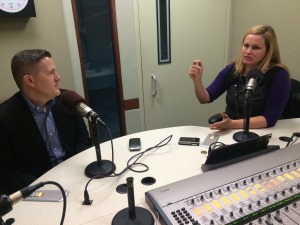 Our conversation started with the question that is often asked when it comes to local TV reporting, ‘How much do looks matter?’

“It’s a visual medium,” says Yarborough whose career was jump-started when he took the morning producing shift out of college at WIS in South Carolina.

“This is stupid. Here we are talking about investigative reporting and now I’m talking about my hair. But that’s what television is,” Thompson says.

While she found it frustrating to focus on appearance, everyone trying to make it in TV news knows it’s something that needs to be addressed if you’re on air.

“It just means you have to have a super thick skin and just keep trucking forward. And you have to be willing to take advice about whatever it is that isn’t working,” she says.

The two have churned out hundreds of investigative pieces in Washington, D.C. The latest for NBC Washington details the documents that expose the DUIs, speeding tickets and traffic infractions racked up by diplomats. The classified documents took years to procure as they were being withheld from the public because of diplomatic immunity.

Coming up with story ideas is the same process as it has always been, Yarborough says. The ideas come both from sources and by questioning what they hear and see.

“Tips are our bread and butter. That’s what we do. Some of our best stories are things Tisha has seen driving into work or I’ve noticed,” Yarborough says.

As far as style, NBC’s I-Team isn’t confrontational to start. Thompson says after every avenue has been exhausted, she’ll offer the department or person they’re attempting to contact the options.

You treat people with respect. You tell them what’s coming at them. I don’t want someone in an interview to be like, ‘I don’t know what you’re talking about.’ That’s a stupid interview. — Tisha Thompson

“We can do this in a well lit room, where you know what’s coming at you and you have thought about what your answers are going to be. … Or we can do this when you’re not expecting me,” she says.

Though they stress that approach is reserved for stories that matter to people’s lives or livelihoods.

“You treat people with respect. You tell them what’s coming at them. I don’t want someone in an interview to be like, ‘I don’t know what you’re talking about.’ That’s a stupid interview,” Thompson says.

The approach they use for an interview shocks people, she says. Both talk about why they like to spend time with the source before the camera starts rolling.

Later in the podcast, Yarborough discusses how they have to think twice about using social media, how to get what you want from a Freedom of Information request and the best ways to avoid paperwork.