Aram Zucker-Scharff is a self-described geek. Which is OK, because if you’ve listened to our podcast, you’ll know that I’m a geek too.

Zucker-Sharff’s particular flavor of geek is gaming. As a freelancer, he’s covered the video gaming industry for the past couple of years. He also moderates Facebook discussions on gaming and a number of other topics too. 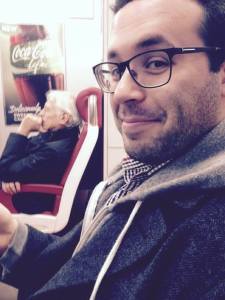 When I found out that he was in D.C. for a few days, I invited him into the studio to talk about a topic that’s been floating around at the edge of my awareness for the past few months now, namely, GamerGate.

When I say that I’ve been sort-of aware of GamerGate, I mean that I’ve seen things pop up loudly in social media and the mainstream press about sexism, bullying, harassment and journalism ethics. I learned a new word — doxing — which is when someone uses the tools of the Internet to find out personal information about an individual and publish it online for everyone to see.

There’s been a lot written about GamerGate. Here are some of the better pieces I’ve come across:

GamerGate is big and deep and dark and ugly, and I don’t pretend to understand all of it.

But it’s clear that it’s something we all need to become more familiar with because it forces us to confront many of the new realities borne out of the digital culture we are building around the Internet.

This is not just a geek thing.

#71 – Rob Pegoraro: Making a living as a freelance writer