Currently, she’s an innovation specialist in the General Services Administration’s 18F office, which she describes as a “tech shop” for the government. 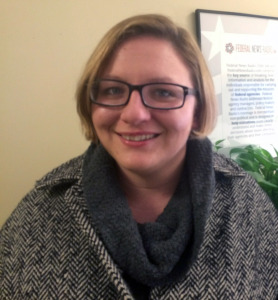 Before Kazil became a federal employee, she worked at The Washington Post when the concept of an “innovation editor” was introduced.

“I remember when the positions were created, because I thought to myself … what is this title ‘innovation editor’ and how does it give you some sort of license to innovate?” she said. “It was almost like ‘You can innovate and you cannot.'”

Later, after she’d made the transition from data journalist to government programmer, Kazil became a Presidential Innovation Fellow in the Obama administration, which amused her former coworkers at the Post.

“A couple of ex-colleagues of mine had said to me, ‘Jackie, innovation fellow? Really? The person who had mocked the innovation editor title?'” she said.

It’s not that Kazil dislikes the word or the concept of “innovation”; rather, it’s the exclusivity of picking one group or position as an “innovator” that she questions.

“Everybody should be doing it,” she said. “That is a title that will go away. … There’ll probably always be like a research or labs component to places, like how can we test the boundaries? But, the idea of sort of innovating in the way that we are is going to be an everyday thing.”

In this week’s podcast, Producer Michael O’Connell talks to Jackie Kazil about her journey from being a data journalist to working for the federal government. She says that those two careers aren’t as different as you’d think. She also shares some tips about what skills potential data journalists should pick up.