Mike Causey covers the federal workforce for — wait for it — Federal News Radio. He formerly worked for The Washington Post, where he also wrote a column about the federal government. 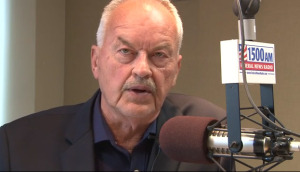 Mike Causey has been covering the federal workforce for more than 30 years, first at the Washington Post and now for Federal News Radio. (Photo by Michael O’Connell)

Causey started out as a “messenger” — which ranked lower than a copy boy — at The Post, while attending college at night. Among his early assignments was being the “bodyguard” for The Post reporter covering the first Beatles concert in Washington, D.C.

“They did not who — what — The Beatles were except it was a big deal,” Causey said. “The fear was there would some kind of riot or some kind of problem.”

During the Civil Rights movement and riots of the 1960s, D.C. was under a curfew. Reporters were one of the few groups of people that were legally allowed out after a certain time of night. As a result, their press credentials glowed so they could be seen in the dark.

Causey eventually took over “Federal Diary” at The Post, which is a column for government workers. Now, he writes a similar column for Federal News Radio and hosts the Your Turn radio show.

“I don’t think the average person has a clue as to what government workers do,” Causey said.

Causey has a good relationship with his readers, who are incredibly loyal. Sometimes, his followers give him tips, such as recent information about the IRS. The agency has cut about 13,000 people from its ranks, which is complicating tax collections, Causey learned from a reader.

Some of the federal workforce jobs can sound kind of crazy. For example, Causey has talked to high-paying government scientists who spent most of their time trying to take the temperature of bears through their — well, listen to the podcast and find out. Strange federal projects are sometimes backed up with logical reasoning. Other times, they are the result of the whim of a congressman.

“Government workers — by and large — don’t sit around and dream up these projects,” Causey said.