Glen Mulcahy‘s first foray into mobile journalism took place in 2010, when he was training video journalists at an event in Budapest

“I took my iPhone 4 and some of the accessories that I had slowly accrued over a few months and I decided to shoot a news package just to see more than anything else,” he said. 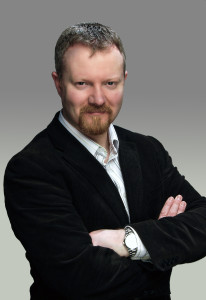 Glen Mulcahy is the innovation lead for technology with RTÉ-Irelands National Public Service Broadcaster and the organizer of the first international mobile journalism conference, MoJoCon.

Back then, Mulcahy was a video journalist working for RTE, Ireland’s public broadcaster.

In Budapest, he used the FiLMiC Pro app to shoot the video and edited it on his iPad using iMovie. He then FTPed the finished video back to Dublin.

“I didn’t tell our guys in the quality control room that it was shot on an iPhone,” he said. “I just asked them to give me the thumbs up or the thumbs down on the quality and they passed it. And for me it was a bit of a revelation, I kind of thought, ‘I wonder if I had told them it was shot on an iPhone would it be more scrutinized more acutely?'”

Returning to Ireland, he replicated his mobile journalism experiment with one of the video journalists at RTE using the same equipment.

“He shot a full story for broadcast,” Mulcahy said. “It passed the quality control checks after being FTPed and it was broadcast. It was then after it went to air that I then revealed the big show of ‘This is all just done on the iPhone.’ And it created quite a bit of reaction, some of our union people had something to say. Even the director general weighed in and asked how it happened and what was the theory behind it.”

This led to a presentation to management and an investment of money in the RTE Mobile Journalism Project, which is now in its third year.

Neal Augenstein, the technology editor at WTOP in Washington, D.C., has blazed his own trails with mobile journalism, using the iPhone to report the news on a daily basis. He’s profuse in his praise of the work Mulcahy is producing at RTE.

“Glen, with his training and his background, really approaches it the way a professional photo journalist would, and he’s able to teach people how to use this consumer tool to make some incredible art and news,” Augenstein said.

“Part of the logic behind MoJoCon is to try and unite a global network of storytellers who have embraced mobile and to put them on the stage together, so they can share their stories and tell people about what they achieved,” Mulcahy said.

The conference, which takes place March 27 and 28, in Dublin, brings together mobile storytellers from around the world and offers training opportunities in the technology and storytelling techniques they use as mobile journalists.

“It is the core conference where you get to hear a fairly unique panel of speakers talk about their experiences,” he said. “Running in parallel, there’s an exhibition space where you can literally do hands-on time with some of the most visible hardware solutions and app solutions that are on the market.”

On the second day of the conference, attendees will have the opportunity to train with some of the panelists, including Augenstein.

“They’re going to share their knowledge and do three-hour workshops on what they do best,” Mulcahy said. “So, if I was a journalism student or if even I was a print journalist with no exposure to telling stories with video, for me, this would be quite a holistic way for me to get full open sight of all the different, amazing initiatives around the world, look at some of the gadgets and gear without spending money online and then learn from some of the best people in the business.”