“It is every cartoonist’s worse nightmare and it’s absolutely chilling. Sadness, shock and horror.” 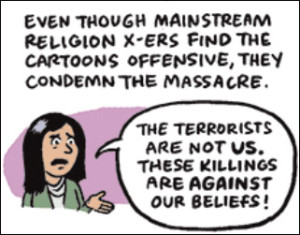 Artwork by political cartoonist Jen Sorensen and used with her permission. View the the full cartoon on Fusion.

That’s how political cartoonist Jen Sorensen described her reaction on hearing of the Jan. 7, 2015, attack on the Paris headquarters of the Charlie Hebdo magazine by two Islamist gunman.

“It definitely, I would say, is an attack on cartooning,” Sorensen said. “I certainly feel terrible for the victims, as we’re all kind of members of the tribe, the cartooning tribe.”

Sorensen draws a weekly cartoon of political and social satire that appears online at Fusion.net and in more than 20 alternative newspapers.

After the initial shock, Sorensen’s next impulse was to leap into action. She began reaching out to cartoonists from around the world. The end result was “12 great cartoon responses to the Charlie Hebdo killings,” a feature she put together with Andy Dubbin.

As events unfolded, other cartoonists began posting their art and news outlets began reprinting the works on their websites and in social media.

Erin Polgreen, editor of the online comics journalism magazine Symbolia, was concerned that many media outlets appeared to be reprinting the artwork without the artist’s permission or even offering to pay for the work. She wrote about her concerns in TPM: “Hey, Media: Instead of Lionizing Charlie Hebdo, Support The Artists You’re Exploiting.”

Cartoons, comics and cartoonists are Michael Cavna’s beat, as the editor of the Comic Riffs column in The Washington Post. In the aftermath of the Paris shootings, he aggregated the reactions of cartoonists on social media and reported the American cartooning community’s response to the attack.

In this week’s podcast, It’s All Journalism producer Michael O’Connell interviews Jen Sorensen, Erin Polgreen and Michael Cavna on their reactions to the Charlie Hebdo attack and how the media — and the cartooning community in particular — responded. For those wishing to show their support for cartoonists around the world, Sorensen recommends donating to Cartoonists Rights Network International.

#102 – Comic satire with the Bob Woodward seal of approval