Ben Lowy didn’t set out to be a conflict photojournalist or even a photographer, for that matter. He went to school to become an illustrator and used photography as a tool to help him draw the human form.

But, in a New York bookstore, he came across a copy of Inferno, James Nachtwey’s collection of war-crime photos from the 1990s, and the direction of his life changed. 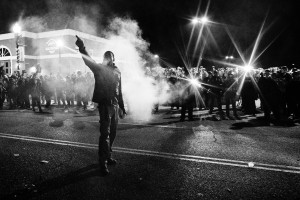 Ferguson, MO | Nov. 25, 2014: A protester points out the origin of a smoke bomb thrown at a police and national guard formation outside the Ferguson police department, the night after riots rocked this St. Louis Suburb.
(Photo by Ben Lowy)

“That idea of witnessing something so powerful that the rest of us, most of the time, choose not to see, choose not to care, to me, that was incredibly powerful and a righteous thing to do,” he said. “That’s very specifically why I went really into conflict photojournalism as the first thing that I did in photography. It wasn’t trying to do fashion or trying to do sports. It was very specifically trying to do conflict photojournalism.”

Lowy developed an interest in world events by watching the news with his father while he was growing up. This helped him develop an appreciation for things that were going on around him.

“Seeing what was happening in the world, between the fall of the Soviet Union and 9-11, which was my adolescence in the ’90s, that’s where my eyes really opened and I started paying attention to the world around me and seeing that there were so many things that were happening, whether it was in the Balkans or in the Caucuses, that the world would say, ‘Oh that’s horrible,’ and then go about our day,” he said. “To me, that wasn’t good. That wasn’t right. That wasn’t what I was personally about.”

It’s difficult for Lowy to translate what he was thinking as a 23-year-old, going to Israel and the Middle East, setting out to teach himself how to be a conflict photojournalist. 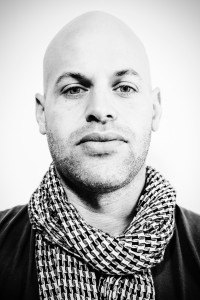 “I wasn’t really thinking about changing the world as much as being an idealist and wanting to help in some way, and this was my way of doing it,” he said.

Lowy sees two aspects to his role as a conflict photojournalist. One is capturing the humanity of those involved in the conflict.

“There are very intrinsic similarities between people the world over and that idea gets lost in the fray of demagogues and policy hacks and think tanks and everyone has their opinion,” he said. “That intrinsic humanity of how we’re all the same gets lost. And I think it’s a very big thing to try to photograph humanity within the horrible environment so somehow it can relate to someone back home.”

The other aspect is the traditional photojournalist’s job of simply documenting events.

“I’m not naive enough to think that I’m going to change the world and stop war from happening,” Lowy said. “But I think that it is worth remembering what has been done and what will be done to create an archive of our history on this planet for good or for bad.”

In this week’s podcast, Ben Lowy talks to It’s All Journalism producer Michael O’Connell about his experiences of covering war and conflict around the world, from Iraq and Afghanistan to the Sudan, Libya and Ferguson, Missouri. He also discusses how covering these events have impacted his life and the challenges photojournalists face when they choose to go into dangerous places. You can view Lowy’s work by following him on Instagram or find out more about him at his website.