The little active weather Ian Livingston saw as a kid growing up in Southern California was interesting enough, but it wasn’t until he moved to Texas that he sat up and took notice.

“The first time I saw a thunderstorm there I was actually legitimately scared by it,” said Livingston, a senior research associate with the Brookings Institute and a member of the Capital Weather Gang at The Washington Post. “It came at midnight and blew my door open and I freaked out. … It was fascinating at the same time.” 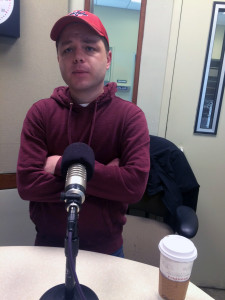 Ian Livingston is a member of The Washington Post’s Capital Weather Gang. (Photo by Michael O’Connell)

The weather’s usually a little calmer in Washington, D.C., but it’s not without some surprises. Take, for example, winter storms that are anticipated to bring up to a foot of snow that result, instead, in rain, or forecasts that call for some drizzle but end up snarling traffic and paralyzing transportation systems with an unexpected layer of ice and snow.

Thanks to social media, forecasters are getting more feedback in real time on their predictions, especially when things don’t go as expected.

“In weather, uncertainty is pretty much everything,” Livingston said. “Predicting the future is hard. I don’t think anybody does it right. If someone did it right consistently, a lot of us would probably be a little tweaked out, wondering how they’re doing that.”

As part of the Capital Weather Gang, Livingston is one of a team of meteorologists and forecasters who pore over maps, computer models and satellite data to create weather predictions on a daily basis. It’s a committee approach to forecasting but one that seems to work.

“I go home on Friday nights and spend a few hours looking at the weather models and satellite images and local observations to figure out what’s going to happen,” he said. “For a normal forecast, it’s an hour, hour-and-a-half process.”

The real fun comes on his vacations each summer, when he ventures out to the Plains states to go storm chasing.

It’s not all glamorous, he admitted. One trip included seven hours sitting in a parking lot in New Mexico, just waiting for something to happen.

But turbulent storms are what drew him to weather in the first place.

Those Texas thunderstorms kicked off his lifelong love of the interplay of high and low pressure systems, upper level disturbances and storm cells.

“That was it,” he said. “Once I saw those thunderstorms, I was definitely hooked.”