Olga Khazan doesn’t necessarily advocate stalking as a formula for getting a job, but it worked for her. 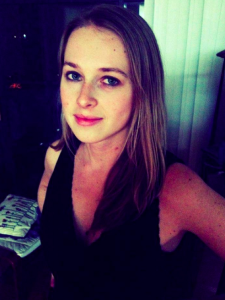 Olga Khazan covers the health and gender beat at The Atlantic. (Photo courtesy of Olga Khazan)

In 2011, she was a freelancer fresh out of graduate school at USC, when she went to the Online News Association’s annual conference in Boston.

“I was writing for the L.A. Times and I had little blog on Forbes,” she said. “I was looking for something full-time.”

At the conference, she met Sandy Sugawara of The Washington Post.

“I think we only talked for like five minutes, but I kind of spent the whole conference just stalking The Washington Post people and kind of hanging out with them by force, and not because they wanted to hang out with me,” she joked. “So, I guess it worked cause after I got back to L.A., Sandy sent me a job listing to be a blogger about startups on this new blog they were starting called On Small Business.”

Packing up her Nissan, she drove cross country to Washington, D.C., and started her first job as a full-time journalist.

“I spoke on a panel at ONA this year,” Khazan said. “It was supposed to be advice for younger journalists and I told the story about stalking the Post people. And then later, someone came up and stalked me kind of, and I was like, ‘Oh, this is what that feels like.”

At the Post, Khazan covered small businesses beat and wrote about startups in D.C. and around the world. She eventually moved into a multimedia and blogging role in the World section, which she acknowledged was something of an odd transition.

“A lot of times, it was just explainers of world events that would happen,” she said. “If there was a protest or something, a lot of times people just wanted, ‘What are they protesting about?’ Other times, it was cool, interesting multimedia videos, charts and things that we would find. A lot of it, because it was online, was just finding overlooked world news from elsewhere and regional publications. So, we looked at a lot of regional stories and trying to contextualize them and give them sort of a broader frame.”

Khazan continued to that type of coverage when she started working at The Atlantic. The story behind getting that job was more mundane and a lot less “stalkery” than snaring her first job at The Post.

Khazan insists that this anonymous process not only worked for her but other people at The Atlantic as well.

“No one believes me,” she said “Everyone wants the inside thing. They’ll email me and they’re like, ‘Forward on my resume because I know no one checks the resume box.’ And I’m like, ‘Oh, but they do.'”

In this week’s podcast, Olga Khazan talks about her journey from freelancer to full-time journalist at The Washington Post and The Atlantic. She touches on the challenges of covering the world health beat and writing about gender issues.