Maybe Otis Redding had it right after all.

Perhaps the best approach to reporting isn’t to start researching a story without emotion, guard up and skepticism out front, but with a little tenderness and compassion.

Tony Carnes, editor and publisher of A Journey through NYC Religions, explained that his team embraces a different method of reporting for their street-by-street, alley-by-alley exploration of religious sites and culture in America’s biggest city. 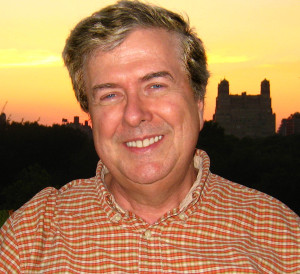 Tony Carnes, editor and publisher of A Journey through NYC Religions, stands with the New York City Central Park skyline behind him. (Courtesy photo)

“We want to immerse people in and [let them] feel for themselves what people are going through, and see, then make their judgments about what’s going on,” he said.

The best way to do that, he believes, is to use what he calls sympathetic objectivity, a practice that, in some ways, turns the investigative journalism approach on its head.

The journalist’s “trinity” of skepticism followed by objectivity and maybe ending with empathy or sympathy sets each reporter off on the wrong foot with his or her interview subject, especially when the person being interviewed is a member of a religious community, Carnes explained.

“We think that you should start with sympathy or empathy with religious folks,” he said. “They have a great story to tell, you just have to find it.”

There’s room for asking tough questions. If someone from a church or religious organization is touting the outstanding success of their youth program, ask how many participants they have. If it’s a small number, the reporter is responsible to provide that information and let the reader make up her own conclusion, Carnes said.

“If you try to fool us or try to push something, [try to] pull the wool over our eyes,” his team will go forward with a more investigative approach, he said.

Carnes’ website launched in July 2010, just a month before the country was embroiled in a short-lived debate about the propriety of establishing a mosque near Ground Zero in Manhattan. While most of the national media were reporting the existence of 99 mosques in the city, Carnes and his team knew there were more than 179, because they had already started their work on cataloging all religious sites in New York City. They’d done some of the ground work establishing relationships with clergy and lay people, earning trust and building credibility along the way.