Chris Faraone sees the forest for the trees when it comes to Oregon.

Boston-based Faraone is in the midst of what could be a career-making, or at least reputation-making, project, examining the intersection of corruption, economic hardship, questionable law enforcement practices, shady mortgage dealings and the demise of the timber and logging industry in a corner of southwest Oregon. 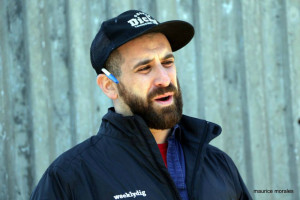 Chris Farone is the writer/publisher of Oregon Tale. (Photo by Maurice Morales)

Faraone, a news and features editor with DigBoston, previously wrote a book detailing his time with the Occupy Wall Street movement not just in New York City but across the country. For his next big adventure, however, he’s trying to get to the bottom of what’s going on in Josephine County, Oregon.

“A friend called me and told me that his parents were evicted from their home of 25 years by a full SWAT team,” Faraone said. Josephine County is what’s called a “zombie county,” where sheriff patrols on nights and weekends have been curtailed in the most rural parts of the county. Two-thirds of the department’s funding evaporated when logging on federal lands ceased and, despite the efforts of community activists, homeowners have refused to pick up the difference.

“It’s a hurting economy, but there’s a lot more going on,” Faraone said. Without the logging industry to turn to for financial stability, and no other industry on the horizon to play savior, “the place is in a real bind.”

Josephine County relies on the neighboring Jackson County for assistance, which is where the SWAT team originated from a year ago, evicting Faraone’s friend’s parents from their home.
“The evictions lured me there,” he said of the saga he’s uncovered. “What kept me is why.”

No editors were interested in me digging back 200 years. The truth is that, this is the history of this region: Theft. Stealing of land. Killing Indians and keeping their children as pets. That’s not an exaggeration.

So far, Faraone’s learned that the person who sold his friend’s parents their house “did a little jail time and paid $750,000 in restitution eight years ago, after he sold them that property, for racketeering.” But the county never went after the broker; instead, the state pursued charge after “some of the property owners, some of the wealthier ones, formed a corporation to sue him.”

After an initial round of digging, Faraone began writing up what he’d found, posting, as of now, eight segments on Medium.com of what he’s calling Oregon Tale.

“It’s been a totally off-the-wall mission across the country, like nothing I’ve ever done,” he says. Thanks to donations and support from friends, family, PayPal and Contributoria accounts, he’s made at least two trips out to Oregon for onsite interviews and investigative work. 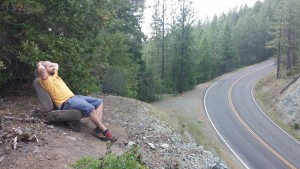 The first few segments are background and introductory work, but “The third one had a bunch of bombshells,” he said. “I discovered that the search warrant used to evict my friend’s parents is actually a forgery.”

The fourth segment, he laughed, “was the reason I had to do this independently. No editors were interested in me digging back 200 years. The truth is that, this is the history of this region: Theft. Stealing of land. Killing Indians and keeping their children as pets. That’s not an exaggeration.”

In addition to the mind-boggling story, he’s found himself surrounded by people with affiliations he’d never imagined, including “marijuana farmers who pack guns, who are taking about banning GMOs. Then you have timber farmers who you wouldn’t exactly affiliate with the Black Power movement but who are very much in support of Michael Brown and the Black Lives Matter movement.”

Where this project will end, Faraone isn’t sure, but he’s happy the work is gaining traction.

“It’s been almost two months and now the Oregon media is writing to me,” he said. “Now they believe me.”