Kristen Muller, managing editor for newsgathering at Southern California Public Radio, station KPCC in Los Angeles, knew not to expect record high turnout during a recent municipal election. But when she realized some reporters in her own newsroom weren’t aware an election was on the horizon, it provided a little clarity on the average 9 percent voter turnout. 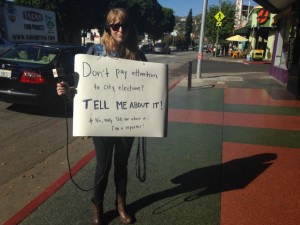 KPCC reporter Meghan McCarty canvasses the streets of Los Angeles with a sandwich board and a microphone. (KPCC photo)

If a reporter wasn’t aware of the election, “surely many, many, many people don’t know,” she said. How could reporters inform their listeners of candidates’ positions on various hot-button local issues if reporters couldn’t discuss those issues with informed listeners?

Some brainstorming ensued and resulted in a simple goal: Find one person unsure of whether he or she was going to vote and make that person care about the election.

“We looked over census and voting data and looked at the people that were really unrepresented at the polls,” Muller said of how the station’s potential voter was selected.

“We imagined this non-voter would have to be someone who was under the age of 44, someone who’s a non-white voter, someone who has real interests that are affected by city decisions,” she said. They settled on Al, a chef and restaurateur, because he best represented someone “who had some real stakes in this election.”

And thus, #MakeAlCare was born. The station wanted its efforts to have a wide reach, so coming up with a hashtag for social media was a must. There was a methodical approach to researching and producing the series but it was not advocacy. 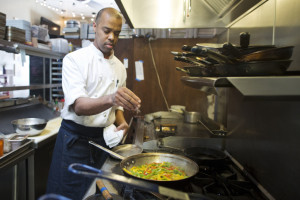 The subject of KPCC’s Make Al Care campaign, Chef Al Gordon, is the founder of Community in Los Feliz. Like the majority of voters in Los Angeles, he doesn’t come out for local elections. (Photo by Maya Sugarman/KPCC)

If anything, a series like #MakeAlCare was just another way in which KPCC carried out its mission.

The power of the project was felt almost immediately: The day after the first story aired, Al was met at work by a few candidates running for local office. By the eve of the election, Al had opened his restaurant for a pre-election party.

“The victory is small,” Muller said, as Al did in fact vote in the March contests. “We didn’t turn around an election, we didn’t boost turnout in a significant way. But we got at least one more voter out to the polls.”