Richard Saul Wurman is no dummy. But, that doesn’t mean he can’t see the value of being dumb sometimes. 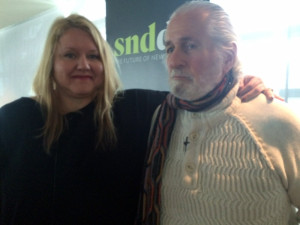 “What I embrace, basically, or what I’ve tried to have as a path in my life is to be the dumbest person in the room,” Wurman told an audience on Friday, April 10, during a keynote address at the Society of News Design’s annual workshop in Washington, D.C.

“I really like to suck out information from everybody else, and I listen to every word everybody says,” he said. “And it’s unsettling, because sometimes the words are really stupid and they’re inaccurate and some speakers are stupid and inaccurate. Just because you’re on the stage doesn’t mean you have any way to the truth. And I’m really obsessed with how stupid I am.”

At 80, Wurman, who Fortune magazine called an “intellectual hedonist” with a “hummingbird mind”, has spent a lifetime surrounding himself with smart people. An information architect, he’s also the author of 83 books, including “Information Anxiety” and the ACCESS city guides.

What Wurman is known primarily for these days is being the co-founder of the TED conferences, which routinely bring together experts in Technology, Entertainment and Design to share their ideas — in other words, the culmination of Wurman’s goal to surround himself and others with smart people.

This is a special podcast is part of It’s All Journalism’s coverage of the 2015 Society for News Design’s workshop in Washington, D.C. It’s a recording of a conversation between TED conference founder Richard Saul Wurman and Kris Viesselman, a designer and founder of Electric Ivy. The conversation was presented as a keynote address on Friday, April 10.