Dan Archer is a graphics journalist, using comics and immersive technology to tell stories of depth and tragedy. 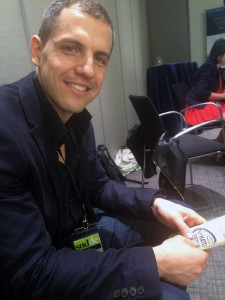 The story Archer has been working on since last summer that’s garnered the greatest degree of attention for comics journalism and graphic storytelling in general is his coverage of the Michael Brown shooting in Ferguson, Missouri.

“Ferguson Firsthand” sprang out of Archer’s fellowship at the Donald W. Reynolds Journalism Institute at the University of Missouri.

“Obviously, it’s a completely, horrendously tragic incident and one that is by no means alone in the context of police shootings of African American men,” he said. “It happened 10 days after I arrived in Missouri. So, as any journalist, being two hours away, I had to go down and I went down and did some sketches. Medium was immediately interested in picking them up.”

Archer had already been using a virtual reality program on a project he was doing on human trafficking. So when he arrived in Ferguson, he began shooting 360-degree video. Combining that with 3-D imaging, he later adapted the story into an immersive narrative using Oculus Rift technology. This allowed readers to walk around inside the story and experience it as if they were on the ground in Ferguson.

“The best ‘truth’ or ‘path to truth’ isn’t through the perfectly cropped camera zoom,” Archer said. “It’s through people who were recording something else in the background or someone else that saw something that was out of the ordinary and it’s a composite that helps to either make or unsettle the idea of just one single truth.”

Human beings are wired to have subjective perspectives of something they observe. Archer tries to bridge those varying points of view by combining them into a single, immersive narrative.

“I find that by putting everything in one, single container, it sort of facilitates and understanding of that and forces the reader to make their own mind up,” he said. “And that’s what’s important.”

Dan Archer spoke Saturday, April 11, at the 2015 Society for News Design conference in Washington, D.C. In this podcast, Archer discusses his philosophy about comics and journalism. He talks about the pursuit of truth and how important it is for journalists to remember that everyone who views an event is seeing it through their own perspective, prejudices and all.