Although Ezra Klein, one of the founders of Vox.com, considers himself something of a nihilist, he’s not that worried about polls that say large portions of the country still doesn’t understand the Affordable Care Act — a topic Vox and other news outlets have spent a lot of time and effort trying to explain. 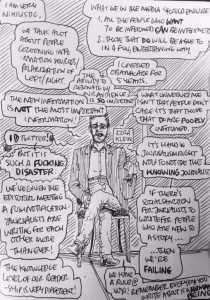 Ezra Klein of Vox.com has lots to say during his presentation at the annual Society for News Design workshop in Washington, D.C. (Art by Dan Archer/@archcomix)

“It’s OK for people to not want to know everything about Obamacare,” he said. “American politics is not set up to require every citizen to spend their entire life reading the Affordable Care Act. We built a representative democracy, we have very sophisticated mechanisms for sorting information that people can use.”

The media’s role then is one of being the explainer of the news for those who are interested in hearing it.

“What we need to be doing in the media is making sure, one, that all the people who want to be informed can be informed,” he said. “And two, that being informed is not just straightforward and easy, but actually appealing and fun. I think we often get much too concerned with the idea that some people just don’t want to be reading political news. That’s OK.”

Get up, Start Up

Klein, who spoke with fellow Vox founder Yuri Victor at the recent Society for News Design workshop in Washington, D.C., said that Vox is still a young company and has a lot of room to grow in terms of becoming the type of resource for its readers that the founders hoped it would become.
The company is currently conducting an extensive overhaul of its cardstacks, the news explainer system it uses to present deep dives into a variety of  topics, from the Affordable Care Act to net neutrality to Passover.

“I think in the coming months, they’ll become a lot more useful even than they are today, but, that’s a slow process,” Klein said. “Figuring out how to do that. Figuring out how to make sure that it is there for the reader when they need it. That’s the stuff that’s the most exciting part of what we’re doing, but it’s also the one that doesn’t come as quickly.”

This week’s podcast is audio from a conversation between Ezra Klein and Yuri Victor, two of the founders of Vox.com, at the 2015 Society for News Design Workshop in Washington, D.C. Their discussion ranges from the ups and downs of launching a digital startup to Wikipedia, social media and the changing roles of journalists in the digital realm.