There is no B Team in Rob King’s world.

A far cry from his days as a copy aid at The Washington Post, King is the senior vice president of SportsCenter and news at ESPN. Speaking at the recent Society for News Design workshop at the Newseum in Washington, D.C., he peeled back the curtains to share some sage advice on the changing newsroom, how his network launched a fully rebranded digital, broadcast and print product and why sometimes the people who might get overlooked should be given a tremendous opportunity.

In a presentation peppered with sports references, King recalled how he originally wanted to be a cartoonist before landing at the Post, followed by a stint at a newspaper in Danville, Illinois, where he stayed for “one year, two weeks and three days.” Admitting that the path to his current job “really makes no sense,” he reminded the crowd it’s alright if the next step in their careers is unknown. 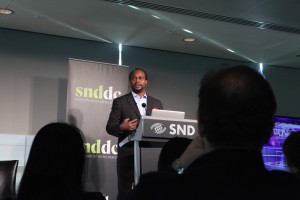 Rob King, senior vice president for news and SportsCenter at ESPN, gives the final keynote speech at the 2015 Society for News Design workshop in Washington, D.C. (Photo by Jennifer-Leigh Oprihory)

“The best advice I ever got: It’s gonna work out, you just don’t know how yet,” he said. “It’s OK that you don’t know now.” This is especially true for college students about to graduate, but also for those in the process of changing careers or trying to navigate the transition from traditional media to the digital world.

The world of media is changing quickly, and ESPN is not only trying to change the way it brings information to its audience but is learning what its audience cares about in addition to sports, he said.

“We use Chartbeat to look at how stories are resonating on our site,” King said. “We’re also working with SpredFast, which allows us to monitor the activity of the 15 million @SportsCenter users to see what they’re up to. We’ve had occasions where, we found out the Kendrick Lamar mix tape was a big deal. If we reference that on air, we’re connecting with our audience” in a brand new way.

He encouraged people, especially in the early years of their career, to pay attention to design, to how a product looks in its environment. “In your younger careers, spend some time thinking about what does that look like, rather than just being like everyone else and being able to make stuff like everyone else. What is amazing and what’s unusual and what’s new? What can you dare yourself to do?”

Most important, King also focused on working as a team, encouraging those in a newsroom or other offices who might not otherwise be called upon to contribute to a big project. If there’s one group working on one platform or product, and another group working on something else, that immediately creates an A Team and a B Team.

“I would urge you to go back to your place of work and find the B Teams,” he said. “Do what you can to eradicate that. Being in the design team and walking around a newsroom, that was like being on a B Team. … Ideas have to come from everywhere. You should give yourself permission to say I want to sit at the big table.”