Journalists can learn a lot from game designers about storytelling and keeping an audience engaged.
“I think the real opportunity in news is to understand the way we approach problems in games and how we look to solve them,” said Lindsay Grace, associate professor at American University and director of AU’s Game Lab and Studio.
Among Grace’s many achievements is founding Miami University’s Persuasive Play Lab, a research group that examined how games could be used to alter people’s opinions and interest. He also helped launch AU’s new Master of Arts in Game Design program. 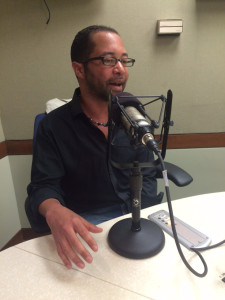 Lindsay Grace is an associate professor at American University and director of AU’s Game Lab and Studio. (Photo by Michael O’Connell)

For Grace, journalism and game design intersect in the space between editorial games and persuasive play.
“The idea is to try and engage people with current topics by framing some of those challenges, affecting people’s perspectives by offering them a game experience,” he said.
Grace described several ways in which journalists could use games to inform the stories they are writing.
“I think one of the things that’s most sort of promising these days is using games as kind of an inroads to the complexity of a particular story,” he said. “We know from years and years of making digital games in particular is that they’re really good at changing people’s perspectives, for giving them an opportunity to sort of put themselves in someone else’s shoes.”
Despite all the bells and whistles that digital technology adds to gaming, the idea of using a game to persuade people is not a new concept. The Monopoly board game, for example, was designed as a persuasive game.
“It was designed to help people understand a theory called Georgist economics and how landlording can actually create sort of an impoverished situation,” Grace said. “And we’ve had that tradition. What people have begun to realize is that we can really produce some really compelling entries into`complex topics through games.”

During a presentation at the recent South By Southwest conference, Grace mentioned a number of current games that are trying to help people understand how government works.
“There are about three or four games these days that all afford people the ability to balance the federal budget,” he said. “The idea is to make it a play experience, but at the same time give people an understanding of how complex that task is, and that’s sort of the rhetoric of those games.”
Designer Molleindustria, for example, uses  games to break down complex stories. “He makes games about the politics behind mobile phones, producing for IOS devices and also games around large corporations and how they operate and giving people that perspective,” Grace said.
Beyond helping to break down a complex story, a good game can draw a reader deeper into that story, so that they want to learn more.
“The science of game design is really about engagement and understanding how to compel people to want to play more,” Grace said. “And so, we’ve got a nice, strong tradition in engagement design. That’s a lot of what I teach. It’s not sort of the standards of game design, but it’s about how to attract and audience, keep an audience and keep them compelled to want to stay in the world that you’ve created for them.”
In this week’s podcast, It’s All Journalism hosts Michael O’Connell and Nicole Ogrysko talk to Lindsay Grace, game designer and associate professor at American University’s Game Lab and Studio. Grace talks about the intersection of news and games design, and how journalists can use games to engage readers and tell stories. He also talks about American University’s new Master of Arts in Game Design program.
— Michael O’Connell