Few places in the United States are as vulnerable to the immediate dangers of rising sea levels as Florida.

“Some scientists suggest there’s been 10 inches of rise in the world’s oceans since the 19th century,” said Robert “Ted” Gutsche Jr., a journalism professor and researcher at Florida International University in Miami. “We’re seeing a lot of climate change worldwide, but some of those issues are really at the forefront in Southern Florida.”

Scientists and climate experts predict the oceans could be 3 to 7 inches higher by 2030, and by 2100, ocean levels could rise 5 feet higher than their current levels, Gutsche said. 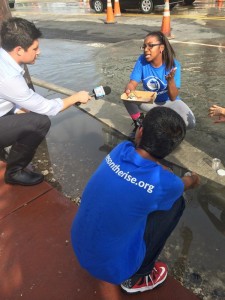 A local Miami TV reporter interviews students investigating flooding streets in October 2014 as part of eyesontherise.org, a journalism project based at Florida International University’s School of Journalism and Mass Communication. The project examines sea level rise in South Florida and is led by student documentarians, journalists, and scientists.

Already, Floridians are seeing their grounds saturated, as the water table is high and the land, at one point part of the swampy Everglades, is changing.

“It’s getting to the point where the saltwater that’s coming in is corroding underground infrastructure,” he said. “It’s infiltrating the aquafers and diminishing the freshwater. When we do have the next hurricane, we could be facing tidal storm surges.”

But a casual glance at most information provided by local media outlets in the region might leave readers thinking everything’s sunshine and roses.

“Anything that people might pick up on the newsstand or get on their mobile phones that’s coming from this mainstream media still tends to be about building luxury and the high life, and not really talking about the property issues of who owns what, and who’s going to be able to stay here, who’s going to be able to own property in the future when, basically, Florida sinks,” Gutsche said. “It sounds very dramatic because it is. It’s happening right now.”

He and his students are doing what they can to turn the tide, so to speak. Inspired by a documentary that aired on local public television stations a year ago, the university, in partnership with a STEM-centered magnet public high school on the university’s campus, kicked off EyesontheRise.org, a journalism project focusing on what flooding will look like across southern Florida.

The program puts students at the forefront of storytelling while pushing the boundaries of who teaches journalism, and who’s doing the teaching. The university students are working closely with the high schoolers, but also learning about various applications of journalism they might not otherwise experience before graduating, beyond writing articles and finding stories.

“We started doing things like event journalism, pop-up journalism stuff,” Gutsche said. “South Florida’s very much about events and flash and flare. We’re trying to tap into entertainment markets, people who like to do entertainment events, so we can put the journalism out there in people’s faces.”