As effective a tool as streaming services like Pandora and Spotify can be for introducing listeners to new music, a playlist designed by an algorithm is no comparison for suggestions made by a real live person someone has come to know and trust. 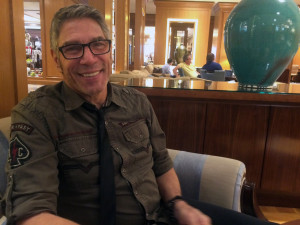 Mark Goodman should know. From his early career with a radio station in Philadelphia and his place as one of the first VJs at MTV to his current gig as host of a daily show on Sirius XM’s The Spectrum, Goodman’s insights on the importance of music journalism in local media outlets combine the changing tides of publication and the growing frontiers for music and listeners alike.

“The Internet is overwhelming but it’s where everything is already or is going to if it’s not there yet. Especially for music,” he said, during the Association of Alternative Newsmedia‘s conference in Salt Lake City. “We need a floodgate. People don’t know what to do with it. Journalists are setup perfectly to be that floodgate.”

Pre-Internet, music fans would turn to critics, whether in their local newspapers, alt publications or behemoths like Rolling Stone or Creem, to find out about the next big bands or to get the latest news about their favorite artists. Readers would eventually learn to trust a writer or DJ’s opinion on bands based on what they recommended or played, and those readers could check out a new band’s performance based on a critic’s recommendation.

Using a playlist devised by a computer program is nowhere near as effective, Goodman says. iTunes or Pandora might pull up a song by an unknown artist because the listener liked something the program believes is similar, and the listener’s reaction is along the lines of “What the hell is this? It’s crap, you don’t like it,” he said. “Journalists, people who you wind up trusting over a period of time, especially local because they’re part of the community, they know who’s been in town… that really is important.”

One of his first trusted publications, when he was working in Philadelphia, was an alt weekly called The Drummer. “As I got older, with other alt weeklies, I looked to people like many of you … to keep tabs on the music trends wherever I happened to be living at the time,” he said.

The path to success, for media outlets and musicians alike, might be online, but both need assistance from good writers.

“It’s clear to me that in order to survive and thrive, you have to embrace the Internet and find how to reach your readers through this technology as it proliferates around the world,” said Goodman, who’s in charge of content at the new online music venture, American Weekend Entertainment. “The Web may be vast, but it’s cold. It’s impersonal. Here is where journalism wins. This is where someone’s impression of you, your knowledge, your sense of humor, this can engage in a way an algorithm can’t.”