The phone in your hand is not just a tool for staying connected and taking care of errands on the go. It’s also a big welcome mat to the “age of mass surveillance.”

David Greene, senior staff attorney and civil liberties director with the Electronic Frontier Foundation, addressed the Association of Alternative Newsmedia’s conference in Salt Lake City recently, shedding some light on the covert and not-so-covert-anymore ways in which a person’s information and private habits can be uncovered, tracked and recorded with a few clicks. His group, based in San Francisco, works to protect civil liberties in the digital world. 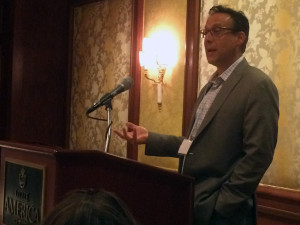 David Greene is the senior staff attorney and civil liberties director with the Electronic Frontier Foundation.

Mass surveillance — which Greene defines as “when the government just collects information about people’s communications in bulk” — has been going on for a long time, well before Edward Snowden fed documents to The Guardian, hesaid. It’s easy to see the difference between mass surveillance and targeted surveillance, which is when someone’s habits and communications are specifically monitored because they’re suspected of wrongdoing.

The reason there’s more attention paid to mass surveillance now, especially following the Snowden releases, is that it’s easier to do.

“Technology has really made it much more efficient for the government to collect, to store and to analyze massive amounts of data.”

“Technology has really made it much more efficient for the government to collect, to store and to analyze massive amounts of data,” Greene said. “The storage thing is one of the more recent technological developments. In this state, in Utah, the NSA has built a very large storage facility for the purpose of storing massive amounts of communications data it’s collected. A few months ago, we flew a blimp over it … with a big sign saying ‘Mass Surveillance Below,’ with a big arrow pointing to it.”

People might think they control their data, and to some extent that remains true. But mobile phones perform so many other functions and have so many other capabilities than in the past that the amount of personal information they contain is almost overwhelming.

“We use our telephones to do all sorts of things,” Greene said. “We communicate with our doctors, we make travel arrangements, we do banking, shopping,” and all this with a company that might have an agreement to provide that information to the government, no questions asked.

“It’s more efficient for the government to go to one entity and say ‘Give me all the information you have’” than trying to collect that same amount of data from a variety of sources.

And while Greene praised Congress for passing the USA Freedom Act in June, he stressed that it did not end bulk phone record collection entirely. Now, instead of collecting all incoming and outgoing call information from all phones on certain providers—the government admitted it had been gathering all such data from users on the Verizon Business Network Service and that other companies had been involved, but has not identified other participants — the government has to specify when it wants incoming and outgoing call information from a particular number.