Jesse Holcomb doesn’t get the opportunity to travel out in the field much. As the associate director of research at the Pew Research Center

But, Holcomb was in Sioux City, Iowa, a few months ago, doing field work for a project on local news. 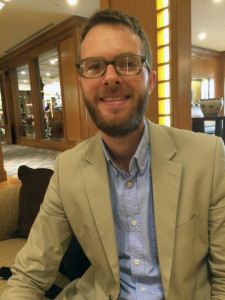 Jesse Holcomb is the associate director of research at the Pew Research Center. (Photo by Michael O’Connell)

“I stopped at a little steakhouse on the Nebraska side of the river, down last the Tyson plant, because I was told to get a steak in Nebraska or Iowa,” he said.

Holcomb struck up a conversation with the bartender, who asked what he was up to in town.

“I tried not to come across as creepy anthropologist,” he said. “But there was one thing she said that got my attention. She said this, ‘Why should I bother with the local TV station when I’ve got Lock Up buzzing in my back pocket all day long?'”

It turns out that Lock Up was a Facebook page the posted the latest information about locals who were arrested in the Sioux City area. The page has since been taken down.

“In its heyday, the thing was this seething stream of mugshots and gossip, updates, police blotters,” Holcomb said. “And it was a primary source of news for my bartender and a way for her to connect to her community via mobile and social media.”

Holcomb sees this anecdote as a commentary on where local news is today.

“It’s not just that the pathways to local news are changing or that the form is changing, but also that these changes are not necessarily happening all at once in the same town,” he said. “There are layers and there are surprises.”

This week’s episode of the It’s all Journalism podcast features an interview with Holcomb and his presentation at the Association of Alternative Newsmedia‘s 2015 Convention in Salt Lake City. He discusses the findings of a recent Pew project comparing how local news was consumed in three cities — Denver, Macon, Georgia, and Sioux City, Iowa.

“If you spend too much time with national survey data like I do, you’d be forgiven thinking that local news trends in Jackson are the same as they are in Minneapolis or that what’s happening in New York is also what’s happening in New Orleans,” he said. “In certain ways, these trends they do hold. But in other ways, the idea of Any Town, USA, is just a little bit too simple.”