To remain viable and important parts of their community, public media stations need to stop seeing people only as contributors of cash and start embracing donations of time, service and talent. 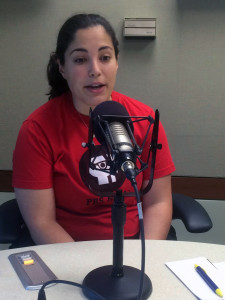 Melody Kramer is a journalist and federal government employee. She was a visiting Nieman Fellow at Harvard University and writes a weekly column for Poynter. (Photo by Michael O’Connell)

Melody Kramer is a data journalist, who writes a weekly column for Poynter. Nieman lab recently published a paper she wrote on putting the “public” back in public media membership.

Kramer isn’t trying to downplay the importance of donations obtained during pledge drives. Instead, she’s encouraging NPR affiliates, in addition to PBS stations and other public media outlets, to allow people the opportunity to make a different kind of investment in exchange for a one-year membership. That way, those who might be interested in public media can feel involved and personally connected to the media outlet from the start, which could encourage them to give financially in the future when they’re able.

Most of those donations come from people listening to NPR or other noncommercial broadcasts in their vehicles.

“What concerns me is that 50 percent of cars within five years will have Internet-enabled radio in the car, and by 2025, that will be 100 percent of cars,” she said. “People who typically went to their NPR member station as their default for good, high-quality radio will suddenly have 10,000 choices in the car and that won’t necessarily be the default.”

If public radio can’t articulate why it matters to its listeners, it’s a losing battle, Kramer warns. It’s time to get creative.

She mentioned the #MakeAlCare campaign from Southern California Public Radio, station KPCC in Los Angeles, a multi-part series in which one man who started out convinced he wouldn’t vote in an upcoming municipal election attended events, met the candidates and otherwise became involved in the process. Listeners became invested in whether Al Gordon, a chef in Los Feliz, voted in the election and likely felt a sense of accomplishment when he did.

Similarly, station WILL in Southern Illinois has an ongoing project in which seventh and eighth-grade students are invited to make a PBS documentary each year.

“It’s really neat,” Kramer said. “They pick a topic, they report on the story, they edit the story, they produce the story. The story airs on their local PBS station. Not only are they introducing these 12- and 13-year-olds to what public media is at a very young age, a lot of them have chosen to go into media as a result. A lot of them are more invested in their local community as a result, and their parents are more invested in the future of the station as a result.”