With his cell phone battery running low and no end to the chaos in site, Baynard Woods learned his photographer had been charged and attacked by Baltimore City Police, another person injured during the riots last April. 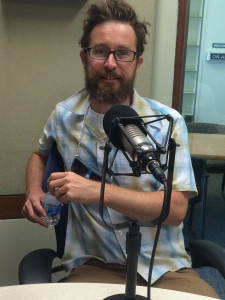 Baynard Woods is editor-at-large for the Baltimore City Paper. (Photo by Michael O’Connell)

As editor-at-large for the Baltimore City Paper, Woods was getting information from protestors who recognized him and his photographer, thanks to daily appearances wearing the same clothes for the express purpose of being recognized as press by the protestors and police force a like.

Woods said his photographer was attacked on purpose, representing a newsroom that didn’t sleep for days and twice in a row scrapped their entire week’s production in order to fill their print publication with enterprise reporting as the city dealt with the backlash and anger of Freddie Gray’s death in police custody.

Woods recalled walking through Gray’s neighborhood as tensions rose in the city. It may have appeared to the rest of the country that the protests came out of nowhere, but Woods knew it was a longer fuse than that.

“It very much felt like an occupation of the city by those who live there,” Woods said.

A long-time member of the City Paper staff, Woods said he learned a lot about using technology to report what he saw, noting that his wife knew he was safe so long as his Twitter feed was active. Access to multimedia platforms courtesy of smartphones changed the way the story was told. “I was videoing, taking pictures, sending out live pictures right then, tweeting where locations of marches were, what police were doing, trying to get photographs of name badges on police as much as possible,” he said.

The constant presence between protestors and police made a lasting impact on Woods. “I’d never felt like what we were doing was as important as I did then,” he said.

On this week’s It’s All Journalism podcast, IAJ producer Michael O’Connell talks to Baynard Woods, editor at large of the Baltimore City Paper. Woods shares his first-hand experience covering the protests, riots and uprisings that took place last April following the funereal of Freddie Gray, an African-American youth who died in police custody. Woods talks about the challenges of covering a big, breaking news story while navigating the often violent confrontation between protesters and the Baltimore City Police.