The Washington, D.C., area is a paradise for media types, and it’s about to get better. 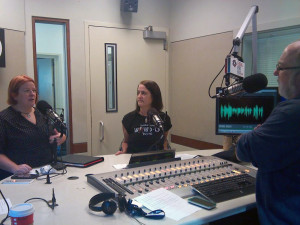 Lauree McArdle, operations manager for AIM, has been in Arlington for 13 years but her relationship with radio goes back to her college days. For the past few years, she’s been dedicating most of her efforts at AIM to the creation of 96.7 WERA.

Most of AIM’s instruction has been geared toward TV and film production and editing, but “it just seemed to be a natural fit to add radio. People are looking for that local content and information on Arlington, specifically. Being a hop, skip and a jump from D.C., most of the news is D.C.-oriented or national news, but I think people are looking for something more specific to Arlington.”

Marika Partridge, the mastermind and driving force behind Takoma Radio, has spent her whole career in radio, moving from Alaska to the D.C. area to continue her work with NPR. “I wasn’t even aware of what LPFM was,” she said. “When I heard in 2011 that the giveaway was going to come around again, I had all the background for saying yeah, we want that. … It was too sexy to resist.”

The “giveaway” was a narrow window of opportunity presented and controlled by the Federal Communications Commission, which asked for nonprofit, community-oriented organizations to apply for permits to build antennas and transistors to operate low-power FM radio stations. Once the applications were filed and approved, the groups got to work preparing for their new stations. For WERA, that meant building an audio room inside the offices of Arlington Independent Media and offering audio production classes; for WOWD, it meant creating partnerships with other organizations for content production and finding a home for the transmitter.

The content for both stations will be all local, all the time, with voices from their respective neighborhoods filling the airwaves.

“It’s a mix of everything. There’s music, there’s talk, there’s advice, there’s sports. I think we’re even going to have a Pokémon show,” McArdle said. “It’s truly what I see as what the community wants. It’s a mixture of things. There’s a lot of variety that’s coming in.”

And the stations won’t be what’s considered passive or easy listening by the larger radio industry, because some shows, at least on Tacoma Radio, won’t be in English, or even French or Spanish, but might contain dialects that are completely foreign to many ears, Partridge said.

But both WERA and WOWD will be 100 percent local, 100 percent of the time, something most listeners have never experienced before.

“The programming will come out of the community. We can’t really say what it is yet, because the people will emerge with the programming,” Partridge said.