With so many changes going on in social media these days, journalists need to be doing one simple thing, according to Natalie DiBlasio. They need to listen. 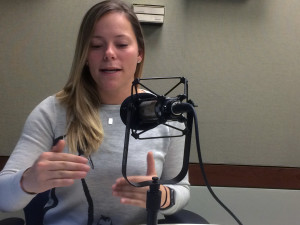 Natalie DiBlasio is a digital editor at USA Today. (Photo by Michael O’Connell)

“I’ve found that one thing I’m really trying to do right now is, on top of chatting on all of these different apps that are coming up, is doing a lot of listening and figuring out how the audience is using different platforms to communicate with themselves and to share news, and, also trying to figure out who is successful in reaching audiences in different places,” she said.

DiBlasio is currently in her second stint working for USA Today. Her first time around, she spent three years as a breaking news reporter. She then left for a year to edit a running magazine, which grew out of her passion for marathons — she competed in 13 in the last two years.

Earlier this fall, DiBlasio returned to USA Today, this time as a digital editor, training with the paper’s social-mobile team.

“We’ve got this particular group at USA Today that really focuses on making sure that all of the work succeeds on mobile platforms, like tablet and your cellphone, and social, so Facebook and Twitter and Periscope and everything that’s being invented as we’re talking,” she said.

Right now, where DiBlasio is doing a lot of listening — and watching — is Periscope, the live-streaming video app.

“I’m really interested in that and trying to figure out how we can use that for better storytelling,” she said.

She’s been spending a lot of time watching Periscopes posted by journalists and non-journalists to get an idea of the many different ways to use it to tell stories.

“Seeing everyday people use social the way that they want to use it helps us as journalists figure out innovative ways that we could use it too,” she said.

After training for about a month in Washington, D.C., DiBlasio recently left to join the paper’s digital team in San Francisco.

“My focus is going to be to make sure that none of our great work is overlooked and also to try to be another set of eyes, to make sure that we’re not missing any stories that are really digital first stories or social first stories that have captured an audience that we would miss if we weren’t tuned into social media at the time that they were blowing up,” she said.

On this week’s It’s All Journalism podcast, Producer Michael O’Connell talks to Natalie DiBlasio of USA Today‘s social-mobile team. She talks about how journalists can tell their stories across multiple platforms and the challenges of keeping up with the latest technology. She also discusses her love of breaking news and her experiences running in 13 marathons in two years.