The next time there’s a governor’s race in Louisiana, get the popcorn ready and enjoy the show.

John Bel Edwards (D) recently surprised voters in his state and across the deep South when he was elected governor after a contentious and scandalous election. He’s the only Democratic governor in the deep South, now that Kentucky voted in Matt Bevin over Steve Beshear’s potential successor, previous attorney general Jack Conway. 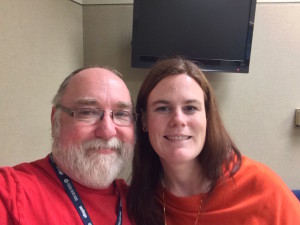 “I don’t think anyone outside of his camp would’ve said six months ago that he’d be the governor,” said Julia O’Donoghue, a reporter with the Baton Rouge bureau of the New Orleans Times Picayune and its affiliated website, NOLA.com. Prior to being elected to the governor’s mansion, Bel Edwards was “a state rep, sort of a low-level state government official. He doesn’t represent that many people. He’s a white Democrat from a very rural part of the state. They’re kind of like unicorns.”

There are plenty of reasons why he won, however, including distractions on the campaign trail. Those distractions were mostly at the expense of Vitter, O’Donoghue said. Vitter was vulnerable from the get-go, given his affiliation with the D.C. Madame prostitution scandal back in 2007.

“He never directly admitted to seeing prostitutes, but he was found in contact with the D.C. Madame and he came out and had a press conference and said he had committed a sin,” she said. When Vitter was up for re-election to the Senate in 2010, it wasn’t a big enough issue to cost him his job.

This time around, running for governor, he decided to skip debates and many public appearances. As the front-runner, at least in Louisiana, that’s an option, because the race doesn’t pit party members against each other but each candidate against all the others. If no one candidate received 50 percent of the vote, Louisiana holds a runoff race to determine the winner.

Vitter even sat out some of the town hall meetings when he’d been given access to the questions he’d be asked ahead of time, possibly because he knew the other candidates were going to make an issue of the prostitution scandal.

It’s a tactic that likely backfired on Vitter, O’Donoghue said.

“When you’re having televised debates and there are three people on stages and two of them are Republicans and they’re beating up on you — even John Bel, who wanted him to win on the other side because it was better for John Bel—all sat up there and trashed him. Not only did he have this prostitution scandal, but (Vitter’s) not well liked. He tends not to be very nice or warm to people.”

Vitter’s past created some unusual circumstances for newsrooms across Louisiana as well.

When a woman who’d been interviewed as a prostitute who had been visited by Vitter almost a decade ago resurfaced after a series of video interviews posted by a local blogger, the NOLA.com and Times Picayune newsroom had to determine whether to report on the interviews and, if so, how much credibility to give either the blogger or the woman, whose story had changed considerably when compared with earlier interviews.

“Our competition put the information at the top of a story, but they also had someone on Vitter and prostitution full time,” O’Donoghue said. “He couldn’t verify anything (the woman alleged).”

Other than when the interviews were brought up during a public event, O’Donoghue’s newsroom left the videos alone and didn’t reference them in their coverage.

This week on It’s All Journalism, Producer Michael O’Connell talks to Julia O’Donoghue, the statehouse reporter for the New Orleans Times Picayune and its affiliated website, NOLA.com, about Louisiana’s recent governor’s race, which posed a few ethical questions for journalists covering the election.