Who better than reporters to lead culinary and cultural tours?

While working as a freelance reporter in Istanbul, Yigal Schleifer and another writer started a blog about the kinds of restaurants and holes-in-the-wall that the travel pages of various websites and newspapers were missing. 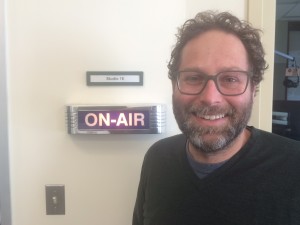 Yigal Schleifer is one of the founders of Culinary Backstreets. (Photo by Michael O’Connell)

“Each of us was writing about once a week,” he said of the blog, Istanbul Eats. “We kept getting frustrated at all the articles we saw, mostly in travel sections. People were coming to Istanbul and kept going to the same tourist traps, or they’d write about these places we thought were terrible and leaving saying they didn’t eat well. We knew — it’s one of the most amazing places to eat in the world, especially if you enjoy exploring these backstreets as we like to do.”

As a journalist, Schleifer admitted, with a laugh, that he’s always used his job title as an excuse to find new and different places to eat, considering it “the greatest side benefit of doing journalism.”

As the blog grew and drew more traffic and attention, filling a cultural and tourism void, Schleifer and his co-author eventually accumulated enough material to write a book.

“We approached a local publisher about doing a guidebook and collecting all those materials,” he said, with the intention of writing the book in English first and then translating it into Turkish. While working on that project, and continuing to write the blog, a friend in Rome suggested they consider starting food tours through the neighborhoods and restaurants they’d highlighted. “We originally called it Culinary Secrets of the Old City,” and the tours were based around “information you wouldn’t find out on your own, getting the stories of people making the food in the city.”

Eventually, the cultural and food tourism enterprise expanded to other cities: First Barcelona, then Athens, followed by Shanghai, Mexico City, Rio, Tokyo, Lisbon and Tbilisi. Now called Culinary Backstreets, the website is a collection of posts written by local correspondents, people with “real enthusiasm about the local and authentic scene,”Schleifer said. “Once we get on the ground there, we develop an activity, usually a walk, a food tour.”

On this week’s It’s All Journalism podcast, Producer Michael O’Connell talks to Yigal Schleifer about how he combined his love of food with his career as a freelancer to co-create Culinary Backstreets — The Global Guide to Local Eats. The website not only highlights culture through food writing and photography, it provides tours into the backstreets of 18 foreign locales.