The next time a cable or network news reporter comments on a “statistical tie” in a national political poll, know that Sean McMinn is shaking his head. 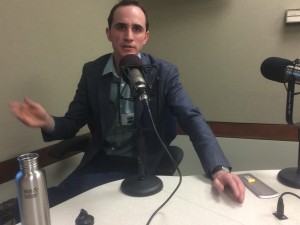 Sean McMinn is a data reporter at CQ Roll Call.

A data journalist with CQ Roll Call in Washington, D.C., McMinn says it’s easier to say that two (or more) candidates have basically the same level of support than, calling that a statistical tie, than to actually delve into the numbers.

“A statistical tie has nothing to do with if the difference between the proportions of voters polling for these two candidates is statistically valid, which is a whole other formula,” he said. “They’re taking the easy way out. You don’t have to explain it or do this complicated statistical analysis. I harp on that in the newsroom all the time. You take a different look at some of these numbers in stories when you have a background in statistics.”

For any journalists out there who might cringe at the idea of crunching numbers and analyzing them for meaning, dreading math as journalists do, McMinn has some words of reassurance.

“Statistics isn’t math,” he said. “Journalists are bad at math, that’s a true statement. Statistics is answering questions just like journalists do. It’s taking data and performing analyses on it to see if this is going to find a result that’s worthwhile, statistically valid. Journalism is the same thing: You’re going out and collecting information and saying this is a story.”

McMinn is a member of a relatively new six-person team at CQ Roll Call, created about seven or eight months ago to not only provide infographics for print and online editions but to take advantage of nearly 100 years’ worth of data, charts, graphs and information stored in the newsroom’s archives.

“I found out today we have the home address after every Speaker left his post in Congress dating back to the 18th century,” he laughed. The team is working on a project to explore where the Speakers go. “Does everyone live within three blocks of each other in Northwest Washington? How many leave the District entirely? Is (Paul) Ryan the only one not living in the District?”

Of course, news gathering and reporting has changed just as much as the names being reported in the publication’s long history, and data journalism is another part of that evolution. It’s not just enough to think about whether a graphic will work well with a story or as a standalone piece, but McMinn has to think whether a graphic needs to be smaller or larger to be readable on Facebook and Twitter, which have different size requirements. There are also considerations to be made about mobile vs. desktop vs. newspaper display.

All these considerations have changed the way McMinn looks at data from the beginning of each project.

“When you’re looking at the data initially, and if you train yourself that way, you’re already thinking this is a bar chart, this is a time series graphic with a line, this is a chart with areas to represent how big something is, or a map,” he said. “Maybe that’s another way you look at the information differently as a data journalist, you’re thinking about it visually from the get-go.”

On this week’s It’s All Journalism, producer Michael O’Connell talks to Sean McMinn, a data journalist at CQ Roll Call, which tracks state and congressional legislation. They talk about using statistics to tell a story and what goes into making a newsroom data team.