The last time I saw Paul Shinkman, we were both sitting in the cargo area of a U.S. Marine Corps V-22 Osprey, as it was flying through pelting rain into National Harbor, Maryland. 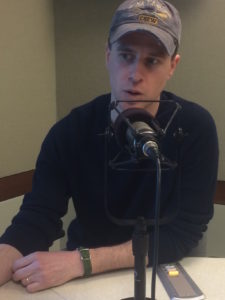 We were among a handful of journalists who converged early in the morning at Quantico, Virginia, where Marine Helicopter Squadron One (HMX-1) is based. HMX-1’s primary duty is transporting the President, Vice President and Cabinet members on official trips.

On the morning of April 7, 2014, HMX-1 was shuttling journalists up the Potomac River to the Sea-Air-Space Convention at National Harbor.

“It’s funny with the Osprey,” said Shinkman, the national security reporter for U.S. News & World Report. “That’s sort of the Marine Corps’ baby that they’re so desperate to prove is not a flying death trap.”

He explained that the tilt rotor military aircraft had a troubled development, including some high-profile crashes.

“But, it serves incredibly in Afghanistan in particular with the Marines’ effort,” he said.

The flight was a bit of boondoggle for me, a chance for a web editor to get away from his desk and shoot some video in the field. It was easily one of the five coolest things I’ve done in my professional life.

For Shinkman, though, the trip was just a slight diversion on the national security beat.

On this week’s It’s All Journalism, producer Michael O’Connell talks to Paul Shinkman of U.S. News & World Report, about covering defense and national security stories. He’s gone from being embedded with Air Force and Army units in Afghanistan to covering the ongoing trials of al Qaeda leader Khalid Sheikh Mohammed in Guantanamo Bay, Cuba. He also discusses the challenge of reporting on ISIS and other terrorist threats around the world.