The world was a much different place in 1966 when the Freedom of Information Act became law.

FOIA is “starting to get a little rough around the edges. … It’s in need of a tune-up,” said Kevin Goldberg, legal counsel for the Association of Alternative Newsmedia and the American Society of News Editors. “When the law was passed in 1966, it was a vastly different age. Now we really have to make sure we’ve updated the law for the digital age and to take advantage of the digital.” 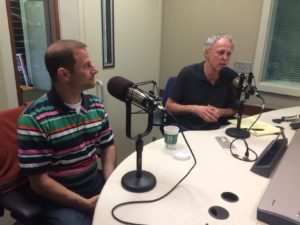 From left Kevin Goldberg, attorney for AAN and ASNE, and Rick Blum of the Sunshine in Government Initiative.

FOIA remains an incredible tool, not just for journalists, who make up a small portion of people who file requests for information under FOIA, notes Rick Blum, director of the Sunshine in Government Initiative. It’s a tool anyone can use to bring vitally important information to life and provoke change.

Just look at some of the reporting done this year, with help from documents obtained via FOIA requests, which have widespread implications, Blum and Goldberg note.

“If you look at Flint, Michigan, and the water crisis there, we know the EPA was dithering with the state and locals because of FOIA,” Blum said.

Building on FOIA, the ASNE kicked off the annual Sunshine Week more than a decade ago, and each year participation in Sunshine Week grows. “You can guarantee for one week a year people are focused on FOIA. I wish it were more, but for at least one week a year, even legislators are focused on FOIA,” Goldberg said. That attention often brings up discussion on how FOIA can and should be changed, including ways to make FOIA more applicable and useful in the digital age.

The proposed legislation also would help modernize FOIA through the use of a portal that would allow people who file a FOIA request to track its progress through whichever agency is being asked for information.

On this week’s It’s All Journalism, producers Michael O’Connell and Nicole Ogrysko talk to Rick Blum, director of the Sunshine in Government Initiative, and Kevin Goldberg, legal counsel for the Association of Alternative Newsmedia and the American Society of News Editors, about legislation making its way through Congress that will update the 50-year-old Freedom of Information Act.