Sisi Wei knew from the time she was in high school she wanted to be a journalist. But if she’d been told that her future resided in visual and graphic interpretations of information, odds are she wouldn’t have believed it. 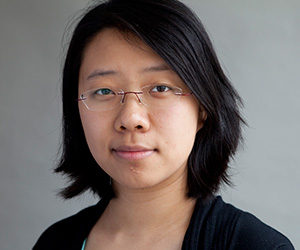 Sisi Wei is the news applications developer at ProPublica.

Now the news applications developer at ProPublica and co-founder of Code with me, Wei credits a course at Northwestern University’s journalism program with introducing her to the power of telling stories through pictures and graphics.

“Really what I learned there was what I was interested in, in terms of telling stories, wasn’t just writing and reporting,” Wei said. “A lot of my interest started growing in other classes I was taking, including magazine design. I was trying to figure out how to use design skills for the journalism I’m interested in doing instead of just writing an article.”

At the time, she didn’t have a wide range of graphic design classes offered through the Medill School, but there was a new online magazine. “I started experimenting, making interactive graphics,” she said. “At the time, they were really simple. The main experience there was I got to try different things and I got to do it without inhibitions, is it polished enough, is it professional enough?”

Her work with the online magazine led to an internship with The Washington Post, which “helped me understand what is possible. Working with a professional team helped me grow a lot” in terms of telling stories through images.

But she’s not done learning. Recently, Wei attended the Tapestry conference, where she heard a presentation from Catherine Madden on Sketchnotes, a program that allows someone to draw a visual representation of a discussion instead of taking traditional written notes.

A few days later, attending the Society for News Design conference in San Francisco, Wei drew her way through the sessions using her iPad and an Apple Pencil.

“As soon as I saw the presentation, I was so inspired, I knew it was something I wanted to try,” Wei said. “I was drawing essentially the whole time. It’s such an active activity, I could only do it for every other session (at SND). I had to take a brain break to recharge and pay attention that closely again.”

Wei later posted her drawings from the conference on her blog.

This week, It’s All Journalism producer Michael O’Connell talks to Sisi Wei, a news apps designer at ProPublica. They talk about telling stories through graphics, including Wei’s recent experience using Sketchnotes to cover presentations at the Society for News Designs conference in San Francisco. Check out her cool conference notes on Wei’s blog.