About a decade ago, when the economy was seemingly rosy and full of promise, Krissy Clark was a reporter for Marketplace covering the boom in Las Vegas. In the early days of her reporting career, Las Vegas was seen as “the new Detroit of America, because there were pretty well-paying jobs that you didn’t need a college education to qualify for.” It was a place where the “middle class dream was widely possible,” given the ubiquity of jobs in casinos and the service industry, which were considered a cornerstone of the American economy and the middle class. Then then market popped. 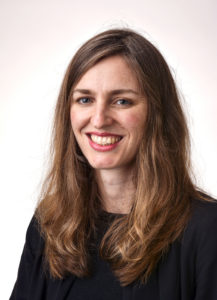 Krissy Clark is the creator of NPR Marketplace’s new podcast, The Uncertain Hour.

“Casinos were falling apart because no one was going anymore,” Clark said. She remembers “talking to people and hearing their experiences of feeling like they were achieving the American dream, they had climbed their way into the middle class and then the bottom falling out like that and then this disorientation — I had worked so hard to get here and now what has happened.”

Those conversations and others that followed inspired Clark and her team at NPR’s Marketplace to launch a new podcast, The Uncertain Hour, which looks at the intersection of real life and economic policy.

The first podcast, posted recently, examines welfare, what it means, who gets it and how the system has changed in the 20 years since sweeping reforms were passed by Congress in 1996. But it also takes a bigger, broader look at what it means to be “middle class.”

“The idea of the middle class is so built into our sense of who we are as Americans,” Clark said. “It’s a great question … what is middle class and who is middle class anymore? We don’t really know anymore. That word gets bandied about so much. Politicians like to talk about how they’re going to help the middle class. Everyone identifies as middle class but often we’re not. Who even is making middle wages anymore has really changed as the economy has changed.”

One of the taglines for the podcast is particularly thought provoking: “The things we fight the most about are the things we know the least about.”

Clark said there’s so much heft and emotion behind words like “welfare,” a perception of what kind of person is on welfare or other types of assistance. “The average person has very little of what welfare is, how it works, who gets it, who doesn’t. That became this fascinating subject for me and my team that we have dived into in this season.”

She hopes the podcast, which provides a little more time for exploration of the meaning of economic policy and how it applies to everyday life, creates a series of connections between the reporters and listeners.

“I think sometimes an issue like welfare, it gets on this runaway rain in a political debate,” Clark said. “We wanted to sort of hit pause for a moment and say, OK, what are we really talking about here? Before we start fighting about it, let’s clarify all these terms and figure out where the money actually goes, how the system really works, what is the history of it.”

What’s it mean to be middle class? That’s just one of the questions Krissy Clark, host of NPR’s new podcast, The Uncertain Hour, answers on this week’s It’s All Journalism podcast. She talks to IAJ producer Michael O’Connell about investigating the big economic issues that impact daily life. Clark also discusses a recent project she worked in location journalism.

#204 – Think globally when it comes to reporting