Tiffany Shackelford can’t contain her excitement about this year’s lineup at the Association of Alternative Newsmedia conference in Austin, Texas, and for good reason.

“This year, we have so many big speakers, so many names, it’s almost overwhelming,” said Shackelford, AAN’s executive director. Among the highlights: “Wendy Davis, who a lot of people will remember from the Texas political fight around women’s rights”; Michelle Garcia, who is known for her work on immigration and covering the US-Mexico border; Trei Brundrett from Vox; Mark McKinnon, “political operative extraordinaire, who has worked with everyone from Anne Richards to (George) W,” and Douglas Brinkley, among many others. “It’s really a phenomenal lineup. It’s exciting,” she said. 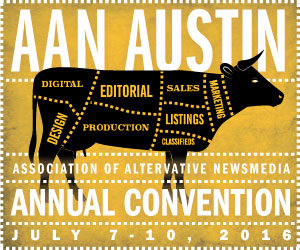 For first-time attendees to the conference, scheduled for July 7-10, Shackelford says to expect “big ideas, big thoughtful thinkers and nuts and bolts, things they can take back to their news organizations. They can expect editorial, delightful ideas. Sales, marketing, audience development — real stuff you can use. This is not a situation where they won’t be able to use what they’re doing, it’s not a situation where it’ll be great for the New York Times but not a local publication.”

Since last year’s conference, AAN has continued its work to support investigative reporting and FOIA issues and ways to serve its member outlets.

“We’ve actually increased the amount of sign-ons that we’ve done, even more since last year,” Shackelford said. “We’ve put together an insurance program for our members that I think will save them a lot of money and protect them in the best way. We’re moving forward on some, I think, amazing progressive coverage of really important issues from our foundation, which is getting started. We’ve been really busy and doing things that are moving the needle in a real way.”

On this week’s It’s All Journalism, producer Michael O’Connell talks to Tiffany Shackelford, executive director of podcast our partner the Association of Alternative Newsmedia about AAN’s 2016 Conference in Austin. We talk about some of the big guests that will be there along with all the after hours activities AAN has planned for attendees. Michael also gives a progress report on the book he’s writing about how to start a podcast.