The last time Chris Faraone spoke to It’s All Journalism, he was in the midst of some independent investigative work out in Oregon. His work, Oregon Tale, looked at the phenomenon of small towns that didn’t have police services but were evicting people from their homes with military-style vehicles and operations. His work received new attention earlier this year during a standoff between federal agents and a group led by Ammon Bundy and his sons, when Bundy and supporters took over the Malheur National Wildlife Refuge and demanded the release of two ranchers. 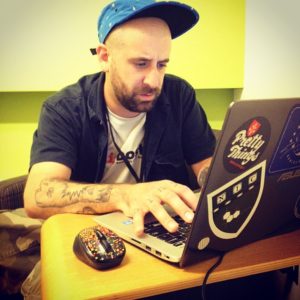 “I’d love to say there were big changes; there weren’t,” Faraone admitted. “Some of those cases we looked at, some people did have some relief. But they’re still losing their homes.”

Part of the problem is the evictions are happening in a “media desert,” and without the media, the factions that would normally speak to each other through journalists have no way to communicate.

“I hope the people who went there saw that this is really a unique part of America … they’re not government-hating rednecks. I hope the tens of thousands of people who read the series, I hope it helps them understand that.”

But he’s not resting on his past efforts. If anything, the work in Oregon has lit a fire under Faraone, now leading a nonprofit journalism endeavor in Boston.

The Boston Institute for Nonprofit Journalism, or BINJ (which Faraone has tattooed across his knuckles), is inspired by alternative and independent publications in California, including the San Francisco Public Press, in which people are working collaboratively to bring about not only investigative journalism but to serve the public in ways traditional media no longer can.

There’s a history of this kind of work in Boston, Faraone says. He points to the Boston Phoenix, an independent paper that went out of business in 2013 after more than 40 years of investigative work.

“When the Phoenix went out of business in 2013, they were still doing four or five 1,200 to 5,000 word pieces every week. That really was the incubator” for investigative journalists in the city, he said. “Dozens of people at the Boston Globe, including at least one person on the Spotlight team who was portrayed in the movie, came up throughout the Phoenix.” 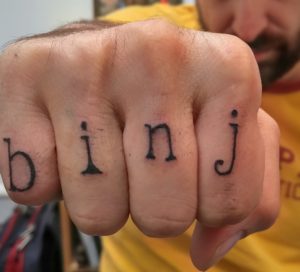 Chris Faraone is so serious about the Boston Institute for Nonprofit Journalism that he’s tattooed the acronym “binj” on his knuckles.

It’s important to remember that some of those headline grabbing stories “covered by the (New York) Times or 60 Minutes, started in more grassroots community newsrooms,” he said.

Boston has a rich media landscape but newsrooms are seeing their bottom lines cut, just as in other cities. “Our idea with BINJ is that we’re not going to be our own outlet. We’re not trying to take the credit for everything.”

After meeting with every reporter, editor and publisher in town that would meet with him, Faraone and his partners asked those newsrooms for their wishlists of stories they wanted to cover but couldn’t, or issues that needed exploring but couldn’t be reached.

“We started talking about the stories we were interested in developing and how they can play a role,” he said. “If we do one story, how can we give a sidebar to this paper that’s relevant to that community? We want to do more than just syndication. … We want to be able to help with resources and network a lot of community outlets so their voices can be amplified to the point where the Globe or one of the TV stations will hear it, pick up on the story.”

Some skeptics might think this kind of work is expensive, and it can be, but more in the $2,000 range than the $50,000 range “We try to spread it around. We’ve contracted with 40 freelancers, video people, photographers — this isn’t just writers. In doing that, we have built a really awesome community.”