Strategic lawsuits against public participation, or SLAPP, “are designed to keep people quiet,” says Kevin Goldberg, legal adviser for the Association of Alternative Newsmedia and the American Society of Newspaper Editors. “It’s a use of the legal system to put people on the defensive.” 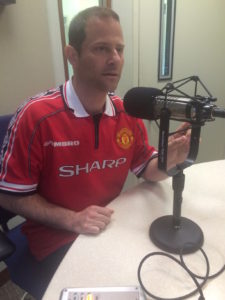 Kevin Goldberg is legal counsel for the American Society of Newspaper Editors and the Association of Alternative Newsmedia.

While not a new tactic — Goldberg jokes that SLAPP lawsuits have been around since “people started speaking in writing” — there have been some high-profile cases in recent years worth noting, especially for journalists.

“SLAPPs are about more than just defamatory statements,” he said. “They can hide in the guise of anything from a copyright infringement to tortious interference with a business contract, to anything. Ultimately it comes down to trying to get people to stop criticizing.”

Other things Snyder claimed were defamatory, including a passage that said he’d “gone all Agent Orange on the trees growing on his land by the Potomac River, they were cut down but technically, as he points out, he did not use Agent Orange,” Goldberg said. “That’s the absurdity of the whole thing, he’s claiming the City Paper said he actually used Agent Orange and therefore the article is false and defamatory.” Additionally, the City Paper article said he’d been kicked off the board of the Six Flags corporation, which Snyder claims is “not technically true.”

Instead of using his name, position and high-profile status in Washington, D.C., to get his own publicity and tell his own story, Snyder had his lawyers contact the hedge fund company that invested in the City Paper. The letter included a statement saying: “Indeed, the cost of litigation would presumably quickly outstrip the asset value of the Washington City Paper.”

In other words, Snyder’s lawyers told the paper to “stop writing mean things about me, take it all back, or I will sue you and make you spend money you don’t have.”

Another example of someone who uses SLAPP lawsuits to scare detractors? Donald Trump, the presumptive Republican nominee for president.

“SLAPP lawsuits aren’t just about the threat (of legal action); the SLAPP is the lawsuit itself,” Goldberg explained. But some 28 states and the District of Columbia have enacted anti-SLAPP laws to protect those people and publications who make statements believed to be, rightly or otherwise, defamatory or unflattering to go beyond the protections afforded by the First Amendment.

There’s been legislation introduced in Congress that would create a national anti-SLAPP law, but the support has been slow going and it could take several sessions to gain strength, he said.

On this week’s It’s All Journalism podcast, Kevin Goldberg, legal adviser for the Association of Alternative Newsmedia and the American Society of Newspaper Editors, explains how Strategic lawsuits against public participation (SLAPP) can have a chilling effect on free speech. He discusses the impact such lawsuits have on journalists and how the public can support anti-SLAPP legislation in their localities.