As of July 19, there were 254 open cases of sexual assault on college campuses, both public and private, across the United States. These cases have been open since at least April 2011, when the Department of Education announced it was going to be paying more attention to the issue and requiring institutions of higher education to start taking reports of assaults more seriously. In the same timeframe, 50 cases have been resolved.

Now The Chronicle of Higher Education is taking a closer look at the progress college campuses are making in the form of a new, searchable database that allows users to look at open investigations based by institution or state. 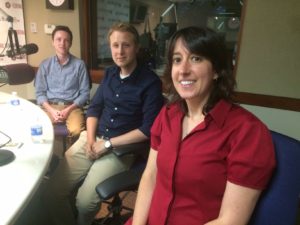 From left, Ben Myers, Jon Davenport and Sara Lipka of the Chronicle of Higher Learning.

“We see it as a tool for people to learn more about this issue,” said Sara Lipka, senior editor on the Title IX Tracker, originally launched in January and relaunched in June after a redesign that made it easier to search. “Our goal is to let people keep up with this process, to see which campuses are under review, to search by institution or keyword.”

Few issues surrounding higher education have demanded as much interest in recent years as campus sexual assault, prompting “widespread concern with how colleges are handling these reports, which they’re required to do under” Title IX of the Civil Rights Act, which prohibits discrimination on the basis of sex, she said.

Some schools might have one open investigation while others have four or five, Lipka said. The source data for the tracker is a weekly PDF published by the Department of Education, which her team has to request every week, in addition to FOIA requests and, in the rare event of a closed case, public documents including resolution agreements.

“We’ve FOIA’d for a lot more,” Lipka said. “We’ve also reported on each campus under investigation to fill in some of the details — what is the campus doing in response, does it have a task force, does it have resources for students — so we can show on each page what is happening at each institution outside the investigation.

After the initial information was collected, it was turned over to web developer Jon Davenport, who worked to determine the search fields that would best represent the data on hand. Ben Myers, a data developer, initially made the case the “unit” for searchers, later changing the format to make the campus the focal point.

“We were able to show the information in a more logical way, in a way we think about the institutions,” Myers said. “We can now look up the institution of interest, see all the cases there and explore all the documents” available for those cases.

The database can be sorted at the state level as well, Davenport adds. “It provides more context as to how many cases there are at specific types of institutions.”

On this week’s It’s All Journalism podcast, producers Michael O’Connell and Nicole Ogrysko talk to Sara Lipka, Jon Davenport and Ben Myers of The Chronicle of Higher Education. The Chronicle recently relaunched its Title IX Tracker, which keeps assembles and makes searchable data about sexual assault cases at hundreds of college campuses across the U.S.