Being an entrepreneur sounds exciting: Get a brilliant idea, make it available to anyone who might be interested, start raking in the money and become the next overnight success.

The odds of that happening? Pretty much nil, said Brian MacMahon of Expert Dojo, an “early stage training academy of entrepreneurs” who wants to help prepare inspired, creative and hard-working people with great ideas become successful. 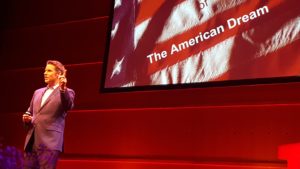 “The failure rate in tech entrepreneurship is between 95-96 percent and 98-99 percent. It’s nothing like the glory we read about, everybody becoming Steve Jobs,” he said. “It’s mainly about people who will take their live savings, or $50,000-$100,000, and invest into their app or website or tech company,” only to wind up broke and working for years to try to recoup their fortune, or some part of it.

Part of the blame for this cycle might rest on the acceptance of failure and the insistence it’s something positive, MacMahon said. “Learning is a good thing. Losing your house, there’s nothing glamorous about it. … We want to prepare early-stage entrepreneurs for the rules of the game,” including how to be wary of people who want to take that startup money and run.

But there’s something else that could hold people back: “People really good at creative (endeavors, including journalists) normally hate telling people how amazing they are. They hate doing marketing channels and they hate almost cheapening the beauty of the creation by going out and selling their soul. The (business development) people normally create something far less worth and are happy going out there all day every day and talking about it, but the actual substance of the creation is way weaker than it could be.”

MacMahon’s learning quite a bit as Expert Dojo helps others, too.

In truth, women in that age group are the ones more likely to come in expecting to fail when launching their venture because they have an idea but not the know-how.

“This is wonderful: We have our low-hanging fruit client,” he said. The advice Expert Dojo provides to them “will still work with everyone else, but our low-hanging-fruit client is the one that needs us most.”

On this week’s It’s All Journalism podcast, Producer Michael O’Connell talks to Brian MacMahon, founder of Expert Dojo, about some of the challenges early-stage entrepreneurs face in trying to take an innovative idea and turn it into a thriving business.