When Margaret Brown first saw the iPad, she saw her future.

“I have loved magazines since the time I could read,” Brown said. “I’ve subscribed to magazines my whole life. I always read every single magazine my parents subscribed to. That’s my passion, that’s my experience.”

With more than 25 years as a magazine publisher on her resume, Brown went to the owner of the publication she was working on at the time and suggested starting a line of digital magazines. He declined because “no one else was doing it.” Without the cost of paper, postage or print, Brown decided to try her hand at digital publishing. 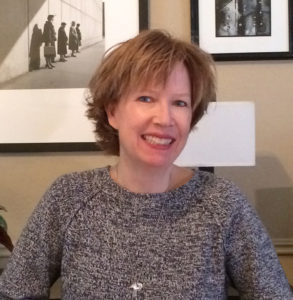 She started a digital book review magazine, Shelf Unbound, in 2010 with the intention of building it up and selling it off. Within a few years, Shelf Unbound had built a steady readership of 125,000 with distribution in the U.S. and 75 other countries. “We distribute it for free and make our money by ad sales,” mostly from self-published authors who appreciate the “large audience of people interested in the literature.”

Shelf Unbound has been nominated for a Maggie Award each year of its existence and won in 2015. In 2016, Shelf Media, Brown’s company, won another.

Like many others, Brown became enamored of podcasts when she first heard Serial. Naturally, she decided to launch a new publication focused on podcasts, called Podster, which first published earlier this year. She also launched her own podcast in 2015.

“Our magazine is targeted to listeners of podcasts,” she said. “We have a lot of podcast creators who subscribe to Podster, but we’re really following the same model (as the previous publication). We’ll get it out to a large number of listeners, we’re going to curate the best podcasts, large and small, and we anticipate our advertisers are podcasters new to the game.”

Each issue of Podster features four “big interviews”: Two known entities in the podcasting world and two relative newcomers. Most of the production is done in-house, but there are some contributors, including Colin Miller from Undisclosed, a follow-up podcast to Serial focusing on the criminal justice system.

Going with a magazine about podcasts was an easy decision to make for someone with a love of, and experience in, magazines.

“I think we bring a quality of design and editorial to (Podster) that some online things don’t have,” she said. “I wanted to retain the magazine experience. I wanted it to feel like you weren’t at a website. We’ve really tried to maintain the feeling of being in a traditional magazine.”

On this week’s episode of It’s All Journalism, Producer Michael O’Connell talks to Margaret Brown, founder of Shelf Media. After 25 years in the print magazine industry, Brown turned to the online environment to launch Shelf Unbound, a review of digital books. Her latest online publication, Podster, features reviews of many favorite and unknown podcasts and their creators.

#189 – How publications can thrive online

#215 – Learning from the best of the best in sports