It’s an unfair statement, as there are things to learn about time management, self-control, discipline and psychology that can be gained from talking with athletes, said  Richard Parr, producer and host of the Best in the World with Richard Parr podcast. 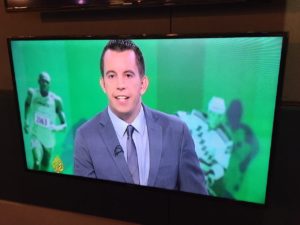 Parr spent six years, across two assignments, in Qatar with Al Jazeera, during which time he “covered absolutely everything. The thing about working in the sports department of a news channel, you’re not necessarily appealing to a big sports fan. You’re kind of appealing to maybe the casual fan, a news junkie who maybe has a little interest in sport. Yes, we covered football, because it’s massive. We covered cricket, because it’s huge in India and Pakistan. We’d cover American sports. And then you’ve got the big events like the Olympics and the World Cup.”

His first stint with EuroSport, in 2005, was with the football department, but he didn’t get many opportunities, so he struck up conversations with people in other departments “who did the random sports.” This led to him editing footage of sports like freestyle motocross, an event about which he knew nothing.

Over time, Parr developed an interest in other areas of journalism and news production, like so many, but he didn’t want to branch out into one of the areas in which he had great interest but the landscape is already oversaturated.

It’s a simple but eye-opening premise he’s taken. “I want to know what they do different for nutrition, rituals, training, maybe they’ve got different sleep patterns, the kind of financial difficulties they’ve had to go through, how they manage their time, psychology,” he said. “Hopefully, some of my listeners who might be interested in a certain sport, maybe it can help them in their sport or their everyday life. I know when it comes to time management, I could certainly learn from some of these top people.”

Among his guests so far are Stephen Hendry, a seven-time snooker world champion, and Richard Faulds, an athlete from the UK who, in the 2000 Olympics, defeated the reigning world champion in shooting. He’s also interviewed Olympic gymnast Shannon Miller, now five-years past a cancer diagnosis, who detailed how her experience with gymnastics helped her through treatment.

“What I find is, it’s how people can push the barriers” that make them successful, Parr said. It might seem so easy to give up when trying something, whether an athletic endeavor or otherwise, but these athletes don’t do that. “These people have this mental fortitude. It’s quite interesting to learn all these different things.”

In this week’s It’s All Journalism podcast, host Michael O’Connell talks to Richard Parr, a journalist who recently covered the sports beat in Qatar for Al Jazeera English. On his podcast, Best in the World with Richard Parr, he talks to athletes about the challenges they faced on the way to becoming champions in their particular sports.