Most reporters know the pain of having an interview that feels too good to cut down to a soundbyte, but what do you do with a 30-minute interview and a 40-second spot?

If you’re Rachel Nania and Jason Fraley from Washington, D.C.’s WTOP radio station, you turn those interviews into a podcast. 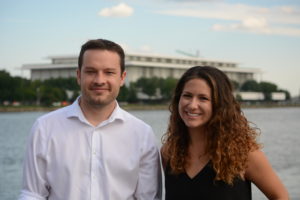 Jason Fraley and Rachel Nania of the Capital Culture podcast.

As the Living editor and the Entertainment editor, respectively, for the station, Nania and Fraley launched the Capital Culture podcast a few months back as a way to take better advantage of the interviews they conduct for their daily pieces.

“We just had all this extra tape and these interviews you can’t really get into,” Nania said. “We were looking for a different medium, a different way to display those interviews.”

Fraley, a previous It’s All Journalism guest, often interviews celebrities in town for events at the Kennedy Center or film or TV projects, including recent interviews with Kevin Costner, Tim Meadows and Henry Winkler about new endeavors, all of which only typically have about 20 to 40 seconds worth of content included in his entertainment spots.

“It just felt like we were doing a lot of work, getting a lot of cool content from these great people we were talking to, and it seemed like a shame to shoehorn it into a 40-second interview. I post the full article to the web every day, but I’m not sure how many people are reading or listening to the whole thing.”

The easy part of their new podcast is the interviews, but even that’s been a learning experience for Nania and Fraley.

“When I go out on interviews, I’m so used to the mic being more pointed at the subject, because I’m getting their tape for the air” and wrapping her voice in at the beginning and end of the piece. But as Capital Culture kicked off, their editor mentioned the need to make Nania’s voice sound good as well.

But perhaps the driving force behind Capital Culture even more than finding a good home for otherwise wasted tape? Showing the world there’s more to D.C. than what they see on CSPAN.

“It drives me mad when people just associate this town with politics,” Nania said. “There’s a huge creative community. This city is so much more than just what happens down on Pennsylvania Avenue and Capital Hill and all the lobbying firms in between.”

That mindset inspired the podcast’s tagline: “If you think D.C. is all politics and traffic, think again!”

This week, It’s All Journalism host Michael O’Connell talks to Rachel Nania and Jason Fraley of WTOP radio in Washington, D.C., about their new podcast, Capital Culture. They discuss the challenges of coming up with story ideas for the lifestyle and entertainment beats and how podcasting has given them a new platform to go long-form on their previously short radio spots.