Being new in any job is tricky. Within the first day or so, it’s all about learning where the bathrooms and water fountains are, which vending machine in the breakroom has the better snacks and which coworkers are known to get a little wild at the office holiday party.

When you’re a new correspondent in a war zone, there’s the additional need to prove yourself a worthy person to trust and take into dicey territory. 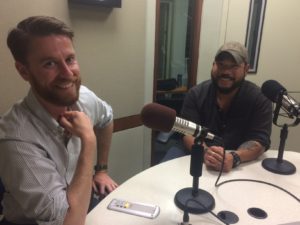 Paul Shinkman, a national security reporter for U.S. News & World Report, and Carlo Munoz, a military correspondent for the Washington Times, spent most of this summer traveling around warzones, trying to get a better understanding of U.S. military operations on the ground.

“In June, I spent two weeks in Ukraine. I started in the West where the U.S. army has a training mission for the Ukrainian army, as far from the border and the Russian army as possible,” Shinkman said.

After that, he spent a few days in Kiev to see how that city is faring after two years of conflict. July was spent in Iraq and Afghanistan for a NATO summit, and in August he spent time in the Mojave desert at the U.S. Army’s National Training Center, “studying how to incorporate cyber operators into conventional combat units. I was one of the first reporters to go check that out.”

Munoz also was in Iraq for just over half a month, trying to get “an on-the-ground understanding of the war on ISIS that the U.S. is kind of participating in.” He split his time between Baghdad and another city, about 35 miles away from the Islamic State stronghold of Mosul, interviewing U.S. generals. The environment in which he was working changed dramatically when he was able to gain trust from on-the-ground soldiers.

Munoz started his career at a small newspaper in Southwest Ohio, just about as far as a person can get from the Iraq countryside, negotiating with militia members and local soldiers to go to some of the riskier parts of the country.

“The further away you are from headquarters, the more control the lieutenant or younger senior officer and enlisted soldiers have over what you get to see and do,” Munoz said. “Especially at the smaller unit levels. A lot of these guys, they get press but not too many reporters nowadays are willing to go with them” out to the more dangerous, volatile areas.

That’s the best way to prove you’re a reporter worth trusting and who understands the risk posed by reporting from a war zone — get out there in it with the men and women facing gunfire every day.

“When we’re out there in the dust, the dirt, no one really knows what’s going on out there,” Munoz said. “They want their story told. Sometimes that sort of desire to do so, their guard comes down.”

There’s more autonomy and respect out in the conflict areas, Shinkman agreed. “You’re not just doing this (reporting) from the comfort of the capital, you’re out with us in the dust and dirt.” To the local soldiers, the mentality seems to be “We’ll take you to what you want to see.”

On this week’s It’s All Journalism podcast, host Michael O’Connell talks to Paul Shinkman of U.S. News & World Report and Carlo Munoz of the Washington Times about covering the national security beat. Both reporters share their recent experiences, traveling in war zones as they try to keep track of what the U.S. military is up to across the globe.