Steve Johnson has always had an entrepreneurial streak, starting in high school when he’d take and sell photos of athletes from his school’s football team using a Mac Mini and some basic software. Now he’s a pioneer in the field of 360 digital storytelling, bringing audiences into stories with maneuverable photos giving a spherical view of the setting. 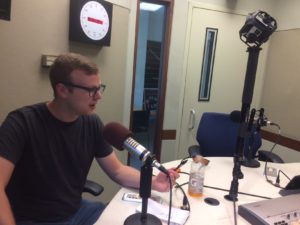 Steve Johnson with his 360 GoPro rig on its stand.

He was a student at the University of Florida and interning at the Orlando Sentinel in 2010 when the Deepwater Horizon oil rig exploded, unleashing billions of gallons of oil onto the floor of the Gulf of Mexico. At the same time, most of the paper’s staff had been on assignment in Haiti, so Johnson was asked to shoot photo and video on location.

“I lived in the Gulf of Mexico for two months and realized the power of digital storytelling and feeding back information to your editor throughout the day,” he said. “It was a great experience that led to me teaching at the University of Florida right when I graduated and continuing to freelance for folks all over the place.”

After 3 1/2 years of that work, during which time he also earned a masters in entrepreneurship, Johnson moved up to Washington, D.C., about 13 months ago to work with nonprofit organizations, making documentaries. 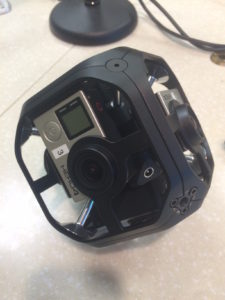 Steve Johnson’s 360 video rig is made up of six interconnected GoPro cameras.

In addition to teaching workshops in which he stresses the importance of financial literacy — “I think journalism as a whole needs to be more aware of how much your stories are worth and how much you can charge for them,” he said — Johnson developed a way to use multiple GoPro cameras to capture not just one-directional photos and videos to accompany a story, but literally capture the world around a focal point and give readers and viewers a more complete idea of a story’s setting.

On the advice of a colleague from the University of Florida, Johnson makes all his work available, open source. “Even back in February, when we did the first 360 piece, we brought a climate scientist to Iceland and did the first that had never been done before, this interview on camera,” he says. He asked whether he should keep the technique a secret or share the knowledge. “Their advice was open source it, own it and be the expert. Let’s be honest. I didn’t cure cancer. Someone else will figure it out too.”

His company, Boundless, is centered on the idea of helping people tell better stories, both in text and visually. The difference is, the viewer controls the perspective of the photos and videos related to the piece.

“With 360, you almost want to encourage pedestrian-ness of shots, because you want them to feel like they’re just there, experiencing it with you,” he said. “I think there’s a level of authenticity in that.”

With 360 photography and videography, the level of professionalism is drastically different. “You get to look around and experience it on your own,” Johnson said . “In terms of storytelling, it poses a great challenge. You have to decide, from clip to clip, where do you think the audience is going to be looking. It’s a challenge. I would say it’s one of the hardest things I’ve done in storytelling and it’s one of the most rewarding.”

On this week’s It’s All Journalism podcast, hosts Michael O’Connell and Nicole Ogrysko interview Steve Johnson, who’s blazing trails with his 360 video storytelling. From the tops of mountains to inside glaciers, Johnson’s work put the audience in the middle of a story. He talks about some of the hardware he uses and some of the thinking that goes into this new type of journalism.

#223 – Are you part of journalism’s lost generation?